Researchers working for the NASA space agency have announced that they’ve found evidence on Mars for an ocean that covered almost 20 per cent of the planet’s surface, which formed shortly after Mars itself 4.3 billion years ago. At its peak, it would have covered much of the northern hemisphere and contained more water than Earth’s Arctic ocean.

Even though scientists have believed for some time that water did once exist on Mars, due to erosion on the surface, it was always thought to be a somewhat rare occurrence. However new evidence suggests that in-fact Mars was very wet and likely much hotter too earlier in its life cycle.

This new information didn’t come from Curiosity digging through the planet’s dirt however, but researchers  at the Goddard Space Flight Centre using infrared telescopes, which looked at the composition of water molecules in Mars’ atmosphere. What was found, was a large collection of heavy water molecules, which contain a higher than normal amount of the hydrogen isotope deuterium. While normal hydrogen based water tends to be lost to space in an atmosphere like Mars’, heavy water doesn’t. Due to the concentration of this type of water left on the planet, researchers believe that there once was a comparably large amount of normal water also.

By analysing the way in which the heavy water reacts with the planet’s thermals and topography, researchers are now confident in making the claim that water was once abundant on Mars’ surface and it was likely located in a large basin in the Northern hemisphere. 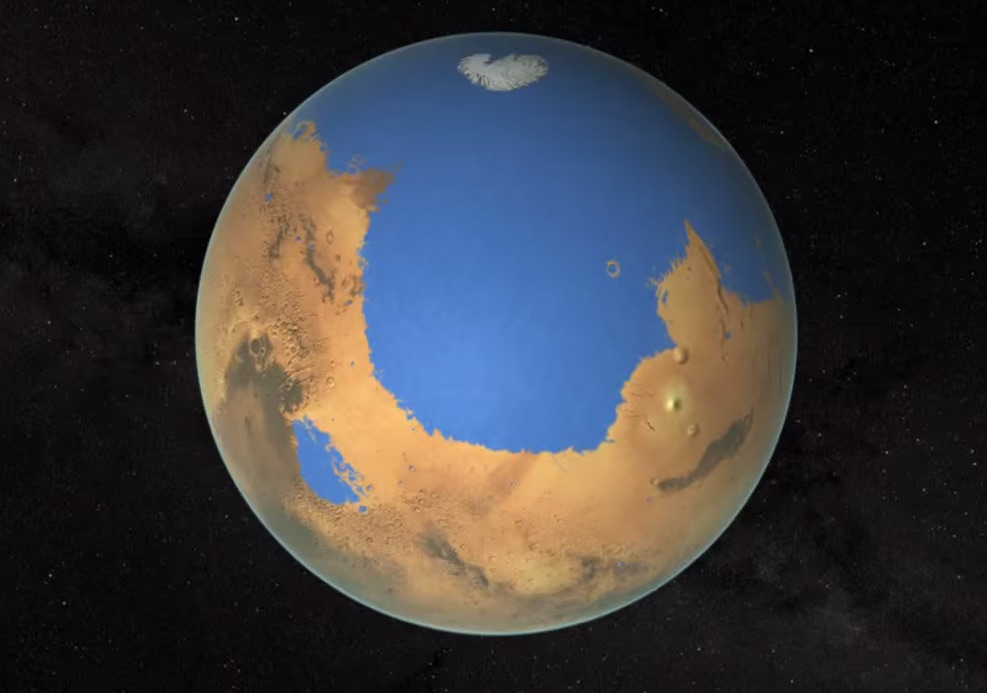 Mars’ ocean would have been at most about a mile deep, making it much shallower than our oceans here on Earth, but it’s still a significant body of water, one that could potentially have fostered life. Similarly, rivers and standing lakes would have been present on other parts of the planet, adding further to the diversity of its landscape and further increasing the possibility of life occurring.

KitGuru Says: If the oceans were there for billions of years, that’s more than enough time for life to have evolved. Granted if we ever want to find any evidence of it we will have to dig very deep down, but the possibility is there.