NASA might have dust formed outside of our solar system

Our solar system is a vast tract of space, but compared to our entire galaxy, or the universe as a whole, it’s less than a single grain of sand compared to all the beaches in the world. That’s why finding out what it’s actually like outside our little plot of space is an exciting prospect and we might actually have our first glimpse in the near future, as NASA scientists believe that we may have recovered the first interstellar space dust.

The dust particles in question, came back to earth almost ten years ago aboard the Stardust probe’s (launched in 1999) sample return capsule. There’s only seven of them and they are absolutely minute, so finding them has taken some time. In-fact, the international teams of researchers working on the particles enlisted over 30,000 civilian scientists to look through thousands of heavily magnified images in order to find the specks.

To put their size into perspective, the biggest of them is only a couple of thousandths of a millimetre across. 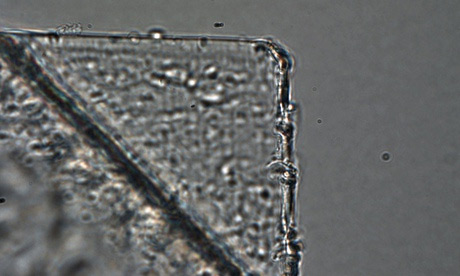 Seen here, is the track taken by one of the larger particles as it ploughed through the aerogel particle collector

The two largest particles, named Orion and Hylabrook, were found after following tracks they made in the aerogel collectors. It was the direction that these particles came from, that first suggested their interstellar origin. Other tracks were also found, but yielded nothing, suggesting that those ones were travelling so fast that they were obliterated on impact.

Both Orion and Hylabrook are believed to be made of olivine, a  magnesium iron silicate that is quite common on Earth, but weathers very quickly on the surface. It’s thought that they could come from a debris disc that orbits a star and could have been fired off into interstellar space in the aftermath of a supernova.

While these particles are yet to be fully confirmed as interstellar, if they are given that accreditation, then they would represent the most rare substance on Earth, having come from far further away than anything else we’ve ever examined.