In the second quarter of 2014 shipments of smartphones reached a new milestone: 300 million units per quarter for the first time in history, according to International Data Corp. When it comes to operating systems, then Apple and Google controlled 96.4 per cent of the market, whereas shares of BlackBerry, Windows Phone and other mobile platforms have dropped.

According to final data from IDC, various suppliers shipped a total of 301.3 million smartphones worldwide in the second quarter of 2014, up 25.3 per cent from the 240.5 million units shipped in the second quarter of 2013. As previously reported, Samsung was the No. 1 smartphone vendor (with 87 million units sold), followed by Apple (35.2 million) and Huawei (18.2 million). 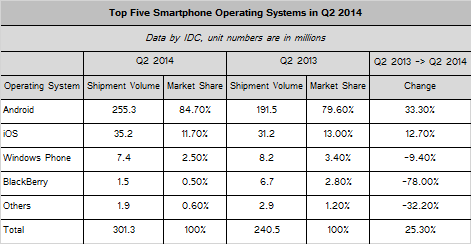 The dominant smartphone operating system in Q2 2014 was Google Android with 84.7 per cent market share. Apple’s iOS commanded 11.7 per cent of the market, whereas Microsoft Corp.’s Windows Phone’s share was 2.5 per cent, which is even lower than in the same quarter last year.

The main reason behind rapidly growing sales of Android-based smartphones is their price: many of such handsets are priced below $200.

“With many of its OEM partners focusing on the sub-$200 segments, Android has been reaping huge gains within emerging markets,” says Ramon Llamas, research manager with IDC's mobile phone team. “During the second quarter, 58.6 per cent of all Android smartphone shipments worldwide cost less than $200 off contract, making them very attractive compared to other devices. With the recent introduction of Android One, in which Google offers reference designs below $100 to Android OEMs, the proportion of sub-$200 volumes will climb even higher.” 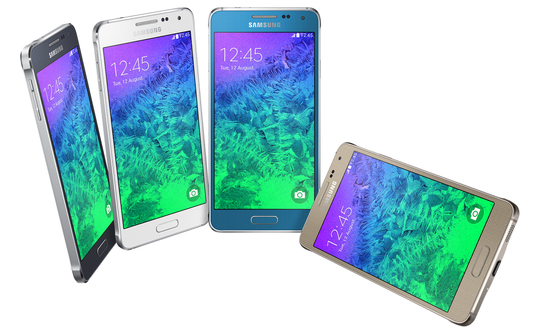 Sales of Apple iPhone in the second quarter did not impress market observers, but there is a clear explanation for that. Rumours about next-generation iPhones with 4.7” and 5.5” displays have been circulating from early 2014, which clearly made a lot of iPhone owners postpone their upgrades to the back half of the year.

Shipments of Windows Phone-based smartphones in the second quarter were even lower than estimated shipments of Nokia Lumia, which is a clear disappointment. While Microsoft’s mobile platform gained supporters this year, they have not yet started to ship products based on the Windows Phone operating system. Perhaps, the situation will change in the second half of the year, but at present it looks like Microsoft’s mobile strategy is failing.

After three consecutive quarters of sequential decline, BlackBerry shipment volumes have bounced back slightly from the previous quarter, but remained 78.0 per cent lower than shipment levels from a year ago.

“It's been an incredible upward slog for other OS players – Windows Phone has been around since 2010 but has yet to break the 5% share mark, while the backing of the world's largest smartphone player, Samsung, has not boosted Tizen into the spotlight,” said Melissa Chau, senior research manager with IDC's worldwide quarterly mobile phone tracker. “The biggest stumbling block is around getting enough partnerships in play – not just phone manufacturers but also developers, many of which are smaller outfits looking to minimize development efforts by sticking to the two big ecosystems.”

KitGuru Says: Although there are over five mobile platforms on the market today, the Android and the iOS simply dominate the market. At present the Windows Phone OS looks pretty hopeless, hence, if Apple manages to gain market share going forward, there will be duopoly on the market of smartphones, but if not, Google’s Android will virtually monopolize the market. 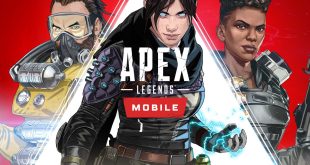 Apex Legends is finally coming to mobile next week