NASA’s Osiris-REx spacecraft has been successfully launched into a hyperbolic trajectory aboard an Atlas V rocket. The asteroid miner will spend the next seven years catching up with the Bennu asteroid, orbiting it and taking a sample from its surface, before returning to Earth.

Lifting off at 7:05 PM local time at the Kennedy Space Center in Florida, the Atlas V 411 configuration used a combination of liquid fuel RD-180 engine and a single solid rocket booster. It’s an interesting design, with off-centre booster placement, but thanks to engine vectoring was able to stay straight and true on its mission, launching the payload successfully out of Earth’s influence without incident.

But uniqueness of the rocketry configuration aside, the Bennu mission itself is an exciting one. While the Japanese Hayabusa space craft returned the first samples of an asteroid in 2010, they totalled less than a gram of material. With Osiris-REx, the plan is to capture close to a kilogram of asteroid, before returning it to Earth for analysis.

To acquire the sample, the plan is for Osiris-REx to approach close to the surface of the asteroid, before hitting it with a burst of gas. It’s hoped that dislodged material can then be collected and stored, before making the trip home. 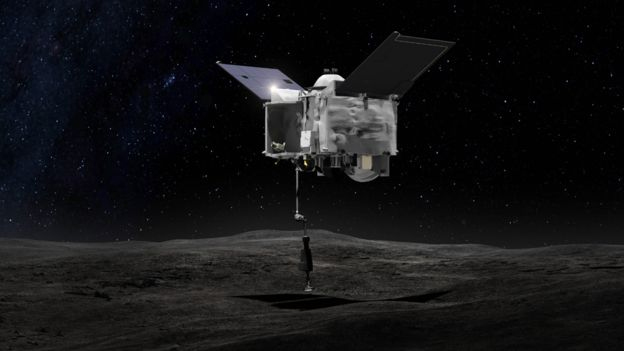 It’s hoped that since Bennu is estimated to be several billion years old, it will us a much greater insight into the history of the solar system and potentially hint at where life on Earth may have come from. The only catch is that it’s going to take some time – seven years in fact – to make its round trip.

Part of that is because it needs to catch up with Bennu in the first place. To make that possible, Osiris-REx will pass by the Earth in September next year in order to gain a gravity assist, speeding it up, essentially for ‘free’ without the use of additional fuel or power. Once it arrives around 2018, Osiris-REx will spend at least two and a half years orbiting and sampling the asteroid, before beginning the return trip.

The sample capture pod is expected to touch back down on Earth on 24th September 2023, while the orbiter will remain at Bennu for further study.

KitGuru Says: Fingers crossed for you Osiris-REx. It’s bizarre to imagine remembering writing about your launch a near decade from now. The world is going to be very different when you return.