Researchers at Sanford University have taken a big step in the further development of quantum networks, utilising photons to carry a message between entangled electronics over a mile apart for the first time in history. This has the potential to allow for the secure transmission of data over vast distances, without fear of interference and will help pave the way for quantum computing, which could jump start an entirely new digital age.

As much as modern computers are faster than ever before, we all know that Moore's Law predicts that before long, we're going to hit a wall with how small we can make silicon based hardware. From there it's on to new materials and new standards to continue improving performance and efficiency, but a quantum computer is the holy grail. Able to handle far more than the digital on/off switches we've grown accustomed to, its power is practically limitless. 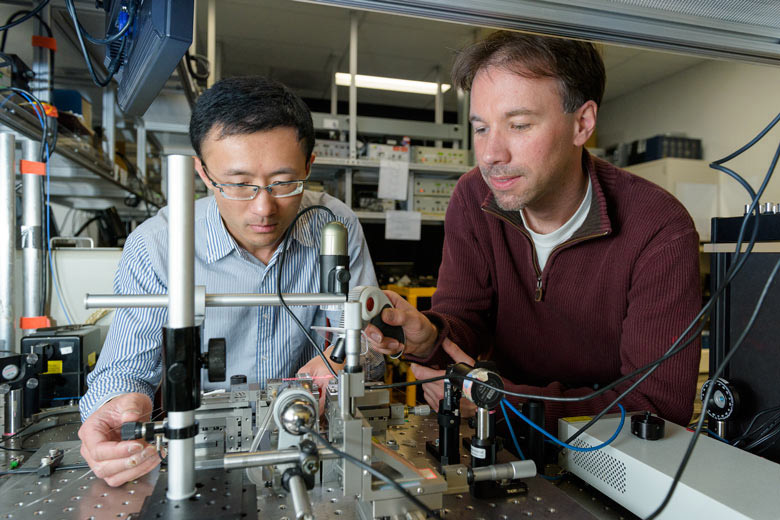 Researchers Leo Yu and Carsten Langrock during the construction of their wavelength converter. Source: L.A. Cicero/Stanford

Quantum computing would also allow for the seemingly-instantaneous transmission of information using quantum entanglement, but creating that entanglement over longer distances is difficult, as those electrons are trapped with their corresponding atoms. However, in this test Stanford researchers were able to transmit data through a fibre optic cable using photons in place of the electronics, in a process called quantum correlation.

The process was a complicated one, involving the use of a “quantum down-converter,” to make both photons from each electron meet at the same wavelength and colour, as well as at the correct orientation, but researchers did achieve the result of entangling two electrons that are separated by more than a mile of cable. That's quite an achievement.

Although there is still much research to go, this brings us one step closer to quantum networks and quantum computers, which have the potential to change the world.

KitGuru Says: My head hurts after trying to decipher this. If you want more information and a better explanation than I could ever give, check over the linked Stanford research post, it's much more detailed.