An alleged AMD insider has published what it appears to be the company’s microprocessor roadmap for 2016. If the plan is accurate and AMD manages to execute it, then next year the company will release a top-to-bottom family of central processing units based on “Zen” micro-architecture as well as one chip featuring its own ARMv8-compatible “K12” cores.

AMD’s “Zen” technology will be used not only for high-performance central processing units as well as accelerated processing units, but also for system-on-chips designed for inexpensive and small form-factor applications, reveals a slide from AMD roadmap for 2016. For applications like tablets AMD intends to offer all-new system-on-chip powered by its ARMv8-compatible “K12” cores, another slide claims. All of AMD's APUs and CPUs due next year are set to be made by GlobalFoundries. Officially, the company’s plans for 2016 are expected to be presented next week, but an alleged employee of AMD published the slides on Wednesday.

After years of waiting, in 2016 AMD plans to introduce its all-new high-performance processors that will replace its current-generation FX-series chips. The new CPUs are going to be based on the brand-new AMD “Zen” microarchitecture that is expected to dramatically improve performance of AMD’s offerings. 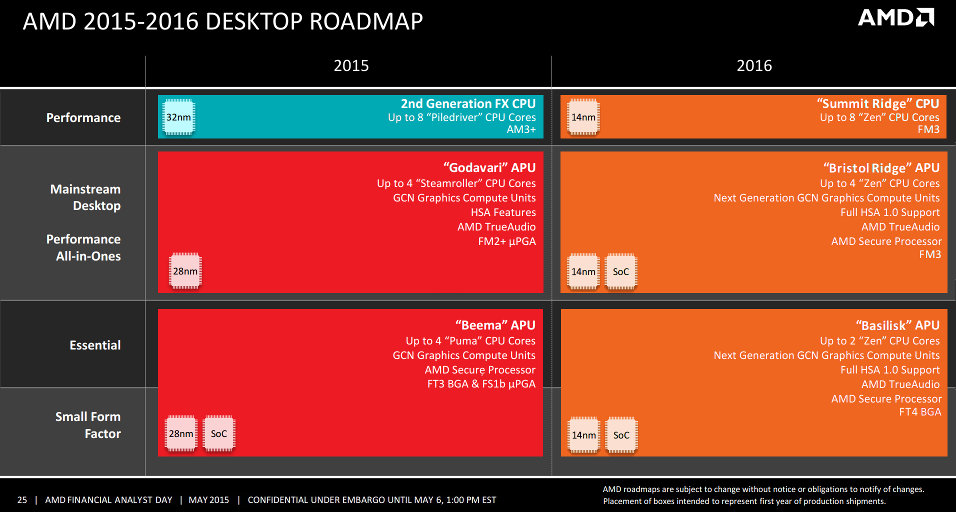 As reported, AMD’s high-performance desktop microprocessor due next year will be code-named “Summit Ridge”. The CPU will integrate up to eight “Zen” cores, 4MB L2 cache, 8MB of L3 cache, a dual-channel DDR4 memory controller (DDR3 support should be possible), a PCI Express 3.0 controller as well as other necessary logic. The chip will use AMD’s new FM3 form-factor.

The new central processing unit will be made using 14nm FinFET manufacturing technology at GlobalFoundries. Keeping in mind positioning of AMD FX-series chips, it is highly likely that “Summit Ridge” processors will be optimized for high clock-rates. Still, they are projected to be made using a standard fabrication process since the company is moving away from AMD-specific technologies.

Two or more “Summit Ridge” dies are expected to be used to build many-core AMD Opteron multi-chip-modules (MCMs) for servers.

This year AMD offers two different APUs for desktops and laptops: a classic “Godavari” APU that is designed to run at high clock-rates and a highly-integrated “Carrizo” that is optimized for low power consumption. Next year AMD plans to unify its design approaches and will again offer a “one size fits all” APU code-named “Bristol Ridge”. 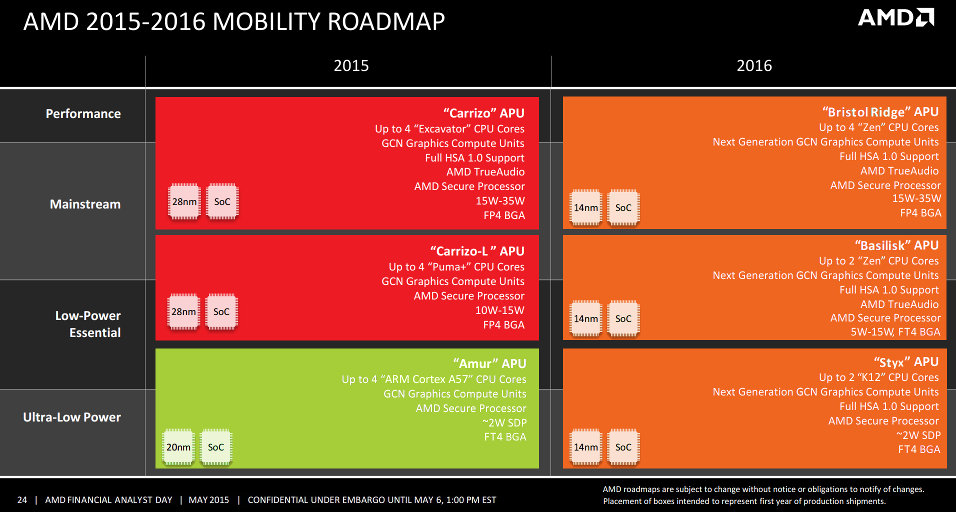 “Bristol Ridge” APUs for desktops will use the same FM3 form-factor as AMD’s high-end microprocessors.

Mobile versions of “Bristol Ridge” will feature 15W – 35W TDP, will sport FP4 BGA package and will be pin-to-pin compatible with “Carrizo” and ”Carrizo-L” APUs.

While “Bristol Ridge” accelerated processing unit is going to be made using a 14nm fabrication process, given the fact that it will be a system-on-chip – like “Carrizo” – it is highly likely that the processor will not be optimized for high clock-rates. Still, thanks to thinner process technology and new micro-architecture, “Bristol Ridge” APUs will likely offer significantly higher performance compared to existing offerings.

For years, AMD used its low-cost/low-power micro-architectures for its accelerated processing units aimed at inexpensive and energy-efficient notebooks and desktops. In 2016, the company plans to use its high-performance “Zen” micro-architecture to build APUs aimed at basic PCs. 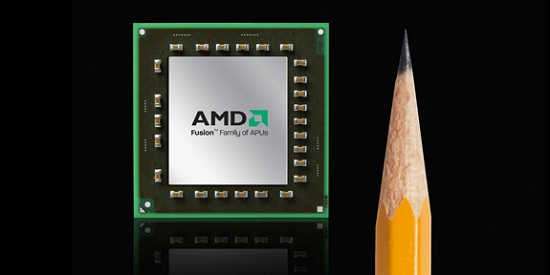 AMD’s “Basilisk” accelerated processing unit is projected to have thermal design power of only 5-15W, but it is going to pack a punch. With up to two “Zen” cores, a Radeon graphics processing unit powered by next-generation GCN architecture, full HSA 1.0 implementation, an integrated input/output controller as well as AMD TrueAudio and Secure Processor technologies, “Basilisk” will support all the features of its older brother, “Bristol Ridge”.

The chip will be manufactured at GlobalFoundries using its 14nm FinFET process technology, hence, expect decent clock-rates for an ultra-low-power SoC.

AMD’s “Basilisk” APUs will feature FT4 BGA form-factor, like the rest of AMD’s offerings for mobile applications in 2016.

“Styx”: The first implementation of “K12” for client PCs

AMD has been trying to address the market of media tablets with x86-based offerings since 2011, but without a lot of luck with design wins. Next year the company is going to change its strategy.

Thermal design power of the chip will be around 2W and the offering will naturally be aimed at tablets, emerging devices (e.g., set-top-boxes with gaming capabilities, game consoles) and ultra-low-voltage hybrids. The SoC will use FT4 BGA form-factor and will be pin-to-pin compatible with “Basilisk” and “Amur” APUs.

Just like other 2016 chips from AMD, “Styx” will be made using 14nm fabrication process at GlobalFoundries.

KitGuru Says: AMD’s client PC roadmaps for next year look very promising on paper. Hopefully, AMD can execute its plans and actual performance of “Zen” will be as impressive as everyone thinks it is.