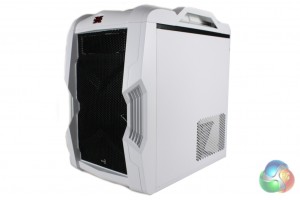 Aerocool have supplied us with the white variant of the Strike-X Cube which looks very striking indeed. Even though it is described as the white version, it sports a black and white colour scheme. 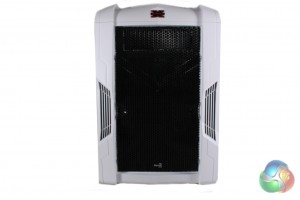 The front of the case consists predominantly of a large mesh vent which facilitates airflow to the interior of the case. Aerocool supply the case with a large 200mm blue LED intake fan in the front, although this can be replaced with twin 120mm or 140mm fans if desired.  There are also blue LED lights behind the vents on either side of the front panel. 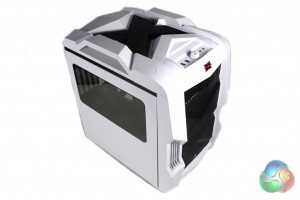 Similarly, the top panel of the case features a large meshed area which can be populated with two 120mm, two 140mm or a 200mm fan if desired.  The plastic and steel construction of the case is fairly well put together but doesn’t exactly feel premium. 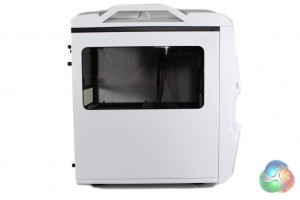 On the left side panel of the case there is an acrylic side window which lets us see the system within the case. The window looks directly over the expansion card area, so will give a good view of the graphics card. 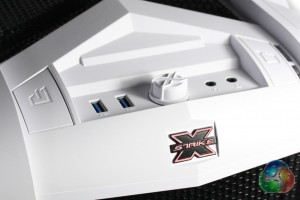 The front panel connections are located on the top of the case at the front. From left to right we find two USB 3.0 ports, a fan controller dial and headphone and microphone jacks. These are flanked by the power and reset buttons on either side. 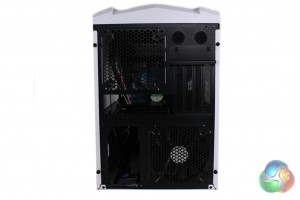 Moving around to the rear of the case we start to get an idea of the internal layout of the case. We can see that the motherboard inside lies horizontally within the case, sitting on top of the power supply and a 120mm exhaust fan vent. There is an additional rear fan vent at the top which can be populated with either 120mm or 140mm units.