Our CES coverage continues, today we had the chance to catch up with be quiet!, who gave us an early look at the new Dark Base 700 White edition, Dark Rock 4 Slim and re-designed Shadow Wings and Pure Wings fans.

The Dark Base 700 White edition doesn't change up the formula much, we have already reviewed the original Dark Base 700. However, this new white edition does look very nice- it is limited edition though, so only 3,000 of them are going to be released. Aside from that, all of the usual Dark Base 700 features are here, including the tempered glass window, integrated RGB lighting on the front panel, USB Type-C on the front panel, tons of internal layout customisation, and two Silent Wings 3 fans for airflow.

The Dark Rock Slim is designed for maximum RAM compatibility, so you should get away with any tall RAM. The included fan is a Silent Wings 3, which can be decoupled and swapped out if you wish. You get four copper heatpipes running through the heatsink and be quiet! is continuing to use its re-worked mounting design for easier installation. Speaking of installation, you'll be able to fit one of these on almost any CPU socket, with the exception of Threadripper. We should see the Dark Rock Slim later this month, meanwhile a white edition of this cooler will be coming in Q2. 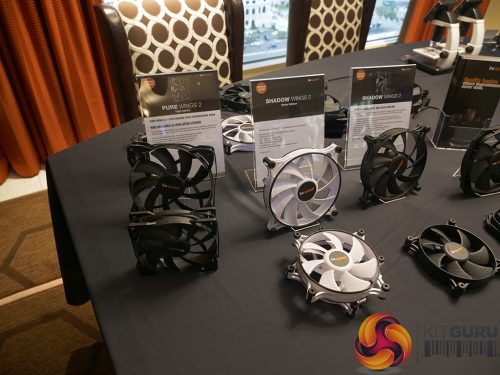 Finally, be quiet! has also re-designed its Pure Wings and Shadow Wings fans. For the Pure Wings 2, you'll be getting high air pressure, making them a perfect choice for radiators. The 140mm version maxes out at 1,600rpm meanwhile the 120mm version can go up to 2,000rpm, the blades are designed to push air through quietly even at higher RPMs, so if silence is your thing, then these shouldn't let you down.

The Shadow Wings 2 have also brought in some design changes. These operate at a much lower speed, 900rpm for the 140mm and 1,100rpm for the 120mm. According to be quiet!, the larger fan tops out at 14.9dB while the smaller one hits 15.9dB, making them some of the quietest fans around.

We are expecting both sets of new fans to launch later this month.

KitGuru Says: A new white case, a slimmer Dark Rock and new fans are all on the way to kick off 2019. Last year was a big one for new be quiet! launches, so it will be interesting to see what else pops up throughout the year.