Although vibration feedback has been a popular feature across consoles, and even arcade games, the feature has been noticeably absent from the PC platform. Peripheral manufacturer Razer aims to change that, revealing at CES that its HypserSense haptic feedback technology will be making its way into a range of devices.

Razer debuted its HyperSense technology in the Nari Ultimate headset last September, allowing players to feel the high-fidelity rumble of a gunshot, the galloping of a horse or even “a gust of wind from the left to the right.” This is believed to give a distinct edge in competitive shooters, and heighten immersion within story-driven experiences.

After positive feedback, Razer is attempting to expand the technology, relating it to its signature Chroma lighting. Of course, this is referring to the extensive synchronisation, where all of the devices communicate with one another. Should a user own the proposed set of HyperSense peripherals, they could feel events coming from the left via the haptic feedback on the keyboard’s wrist rest, or from the right with “simulated tactile feedback” on the mouse. Large impact events, such as explosions or the character falling from a great height would be handled by the headset and gaming chair for maximum effect. 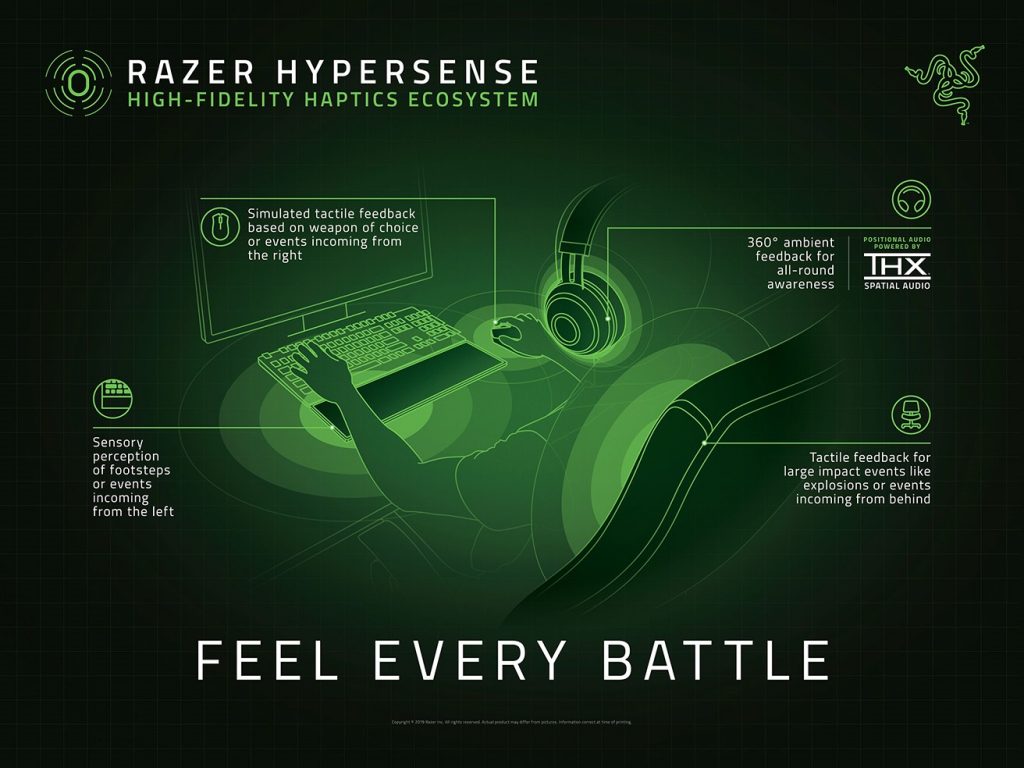 “Razer HyperSense has tons of potential to increase immersion in gaming,” said Tim Willits, Studio Director at Doom developer id Software. “I recently tried the Razer Nari Ultimate, and the added layer of tactile feedback to positional sound made me feel even more engaged and aware of my surroundings. I can’t wait to try an entire ecosystem of haptic enabled devices working together to bring to life the world and action of video games.”

So far, the technology is still in the prototype stage, with the wrist rest being handled by Lofelt, the chair by Subpac and other undisclosed manufacturers involved in the making of other peripherals. Razer is currently reaching out to developers in order to gauge interest, meaning it could be quite some time or quite a few changes before these come to market. Alternatively, it’s possible they might not make it past this proof-of-concept phase.

KitGuru Says: Personally, I love the idea and think it could simultaneously give a much-needed boost to the virtual reality market, should it ever reach it. What do you think of HyperSense across all peripherals?