Last year, Samsung unveiled “The Wall,” the world’s first MicroLED television that lives up to its name at a whopping 146 inches. Proving that this technology is as scalable as it claims at CES 2019, the company has announced an expansion of the range including a smaller version better fit for homes and an even larger model.

MicroLED technology utilises red, blue and green micrometer (µm) scale LEDs that are intended to deliver “incredible definition, without restrictions to size, resolution or form.” The 146-inch Wall has since been cut from an 80mm thickness to just 30mm since its 2018 debut, while Samsung partly shifts its focus towards an enormous 219-inch screen using the technology this year. Of course, this is hardly suited towards the consumer’s home as very few people have such space, prompting Samsung to also present a more modest 75-inch variant at 4K resolution.

“The Wall 2019 has received enhancements in design and usability for the home so that consumers can experience a relaxing environment that has been tailored to their individual lifestyles,” explains Samsung’s Younghun Choi. “We consulted with interior designers to ensure that a broad range of styles would be represented.” 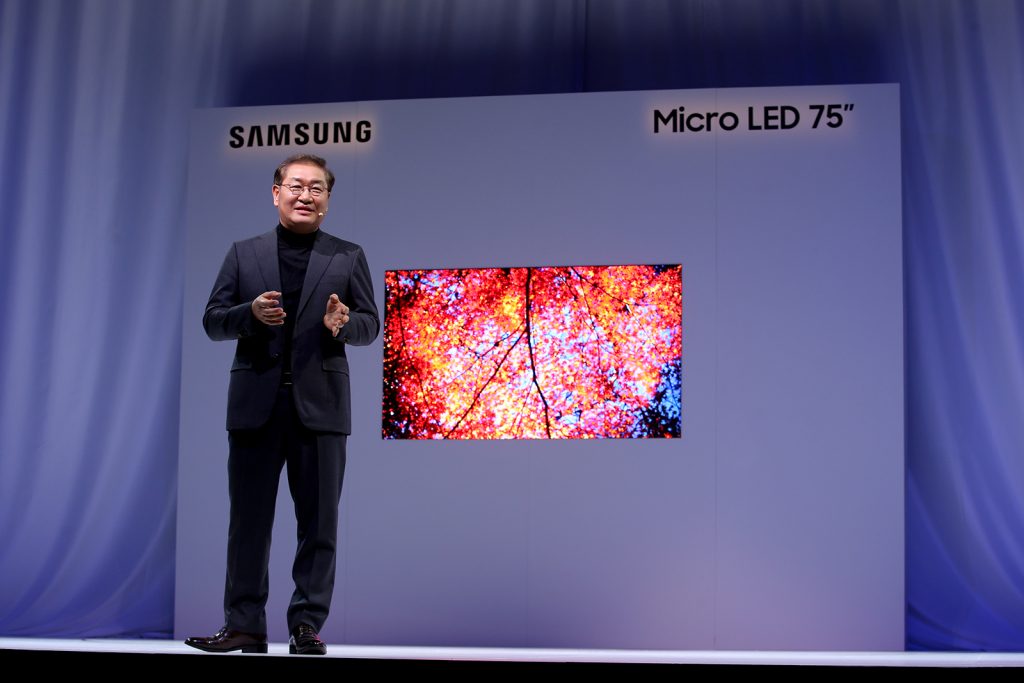 The future of MicroLED technology comes in bezel-less panels that modularly fit together, allowing for any number of sizes or shapes. This isn’t intended to do away with the standard aspect ratio, but expand the display’s use beyond watching television, including a replacement for hanging photographs on the wall when not in use. It also provides users with better means to fix their TV should a problem arise, by reducing the amount of panels used while one gets repaired or replaced.

This is said to be controlled with a dedicated tablet, potentially allowing consumers to customise what appears on each panel, or linking them to form a larger television. The extent of the technology and its accompanying software remains to be seen, as Samsung confirmed that MicroLED is still in its prototype stage.

Despite just being a proof of concept, MicroLED has excited the industry with Anne Eaglesfield, Head of Consumer Electronics at Argos expressing confidence that the consumer-angled 75-inch television would “go down a storm with our customers.” This is thanks to a “growing demand for larger screen sizes,” with the retailer seeing last year’s “sales of jumbo TVs (65” or more) soared by 139 per cent year-on-year.”

KitGuru Says: There’s definitely promise in the technology depending on how expensive it would be when it hits market. It would be incredible to keep adding panels to expand the size of a television whenever consumers can afford to dip back into their pockets. What do you think of Samsung’s modular MicroLED panels?