It seems bigger is better at this year’s CES, as monitors and televisions are reaching record consumer sizes. Earlier this morning, we learned that Nvidia is partnering with companies such as ASUS, Acer and HP to bring 65-inch 4K G-Sync powered monitors into the hands of customers. Now, Samsung is upping the ante in the television world, introducing its 146-inch modular television, dubbed “The Wall.”

Samsung uses MicroLED technology in its 146-inch modular TV, which allow it to deliver “incredible definition, without restrictions to size, resolution or form,” according to its official announcement. “It is a self-emitting TV with micrometer (µm) scale LEDs – which are much smaller than current LEDs, and serve as their own source of light.” 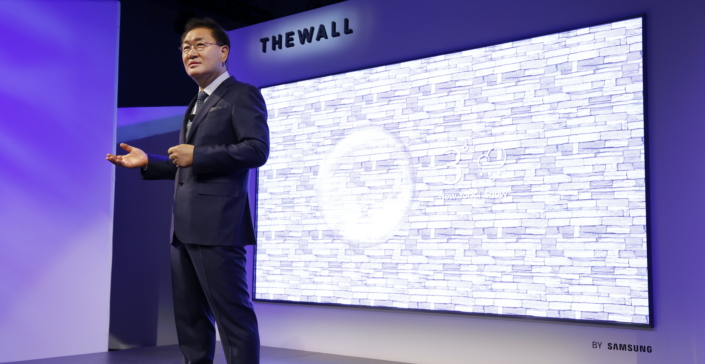 The MicroLED technology is built to rival that of the popular OLED panels that have dominated high-end televisions for the past year. Both emit their own light, meaning that individual pixels can be switched on and off. This might not seem like much, but it helps to create better contrasts and dynamic range.

The modular part of its functionality refers to the fact that The Wall can be connected to other displays without issue, and surprisingly without a performance impact. While this is a great innovation, considering the base television is 146 inches, it’s unlikely that anything apart from businesses will utilise the option to add more screens. Still, it’s interesting that this technology might one day make its way to smaller, more house-sensible screens.

KitGuru Says: When I hear of the sheer size, I can’t help but think of Barney Stinson’s hilariously large television in the hit sitcom How I Met Your Mother. As a film & television buff, it would be nice to one day build a home theatre and this might just be the technology to help with that, although I can’t imagine it to be cheap.