To test the performance of the Corsair Hydro H75, we built a powerful X79 based system on an open test bench to push the cooler to the limits.  As we were testing on an open test bench, we directed a Be Quiet! Shadow Wings 120 mm fan at the VRM circuitry to better simulate the airflow generated in a case.

For our extreme tests, we manually overclocked the i7-3930K to 4.7 GHz by increasing the multiplier to 47x, leaving the baseclock set at 100 MHz.

We set Load Line Calibration to ‘High’, and increased the CPU Current Capability to 120% with a minor voltage increase.  Speed stepping was disabled for both stock and overclocked tests. 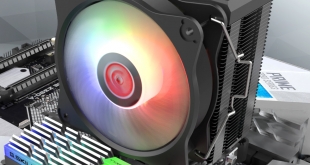 Raijintek is adding a new CPU cooler to its portfolio this month. The new compact Eleos …