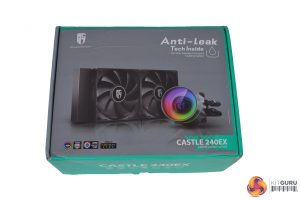 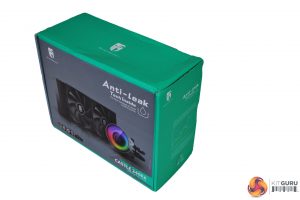 The front of the packaging shows a large image of the cooler in the centre, while the name and reference to the anti-leak technology sits on the right-hand side. A Gamer Storm logo is situated at the top left, bottom left shows compatible motherboard RGB software. 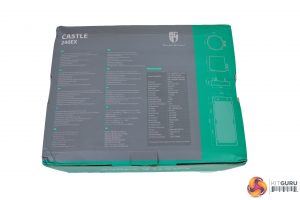 Highlighted on the rear of the box are key features and specifications, accompanied by a diagram, showing dimensions to the right. 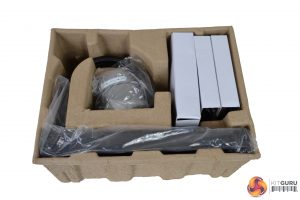 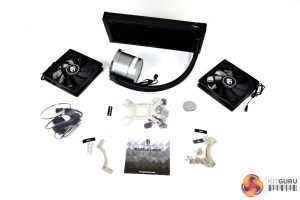 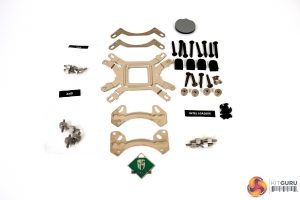 Once removed from the packaging, we can examine what is included. There is mounting hardware for current Intel and AMD platforms, including socket TR4, while we also find two TF120 S fans, which Deepcool state are specially tuned for the Castle 240EX.

Also included are a bundle of cables and RGB lighting controller, an extra logo disc for the pump, the user manual and most importantly, the cooler itself. 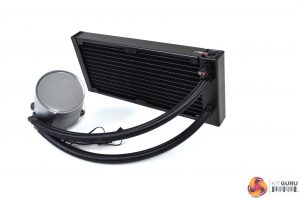 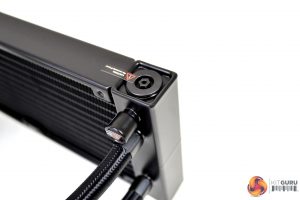 On further inspection of the cooler, we can see at the top corner of the radiator, where the anti-leak bag is located, a caution stick has been applied. Dimensions of the radiator are 282mm long, 120mm wide and 27mm deep without fans fitted – so 53mm deep with fans installed. The radiator is constructed from aluminium with a high-quality satin black finish. 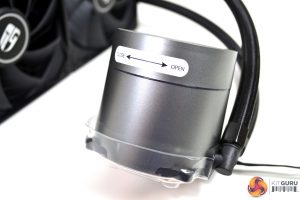 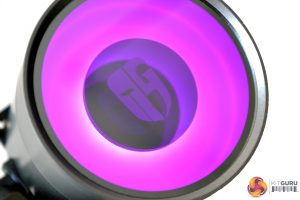 The pump assembly cuts quite an imposing figure. Its extra tall-and-wide design gives it a rather chunky look. The only RGB lighting comes from the top section of the pump, where there is a LED ring around the perimeter. Within the centre, there is a two-way mirror glass design and when power is connected, RGB lights up the glass centre to reveal a Gamer Storm logo disc beneath. 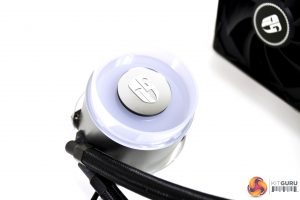 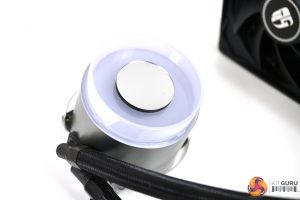 A removable top section of the pump has been implemented into the Castle 240EX for access to the logo beneath. The Gamer Storm logo can be rotated, so no matter which position you mount the pump, the logo can be facing upright. Deepcool have included a blank logo disc for you to customise with your own design if you wish or you could decide to leave it blank. 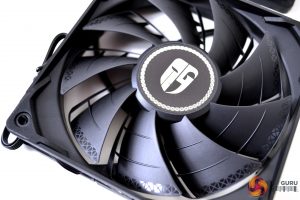 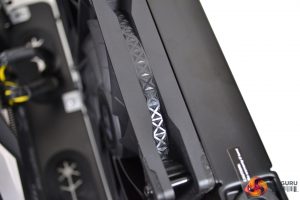 Two TF120 S fans are included with the Castle 240EX. They sport a patented two-layer fan blade design, which Deepcool say are ‘air-flow amplifying’, with noise cancelling frames. The tips of the fan blades have some intricate detailing, which carries over to the sides of the fan frame. Anti-vibration rubber pads are integrated into the four corners of the fan around the mounting holes. 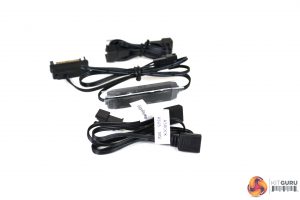 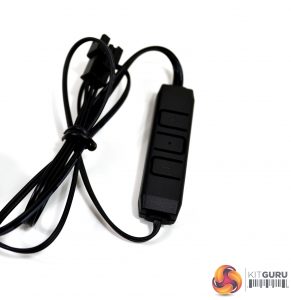 There is a small lighting controller included, which has plus and minus buttons to toggle through various RGB patterns, such as Dynamic, Static, Breathing, Comet and Fashion Collision. Another central button scrolls through various speed settings and by holding this button continuously for three seconds, turns the lighting off completely.