EK Water Blocks has released a new monoblock for AMD AM4 based CPUs, as part of its Quantum line of products. The EK-Quantum Momentum ROG VIII Hero D-RGB will specifically fit the AMD X570-based Asus ROG Crosshair VIII Hero motherboard.

The new monoblock features digital addressable RGB lighting and will be compatible with Asus Aura Sync software, for full control over RGB lighting colours and patterns, with each individual RGB LED being customisable separately. 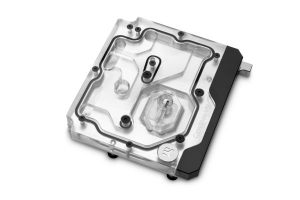 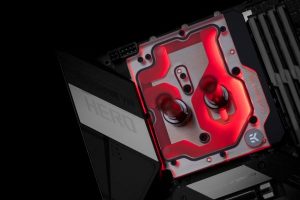 Primarily constructed from a nickel-plated copper base, with the top manufactured from an acrylic plexiglass material. EK has supplied pre-installed brass standoffs to allow for easy installation. A digital addressable RGB lighting strip is integrated into the monoblock and features a 3-pin RGB LED cable for direct connection to a motherboard header, or it can be connected to any other 5V 3-pin LED controller.

The EK-Quantum Momentum ROG Crosshair VIII Hero D-RGB is available to purchase immediately through the EK Webshop or from EK partner resellers. The MSRP for the new monoblock is €139.90 which is around £120 at current conversion rates.

KitGuru says: Monoblocks for specific motherboards appear to be a common thing these days. However, they are a little more expensive compared to a simple CPU block but they offer the benefit of cooling other areas such as the VRM, which I personally think is an excellent solution.