EKWB has been hard at work updating some of its previous hardware with new designs featuring D-RGB addressable LED lighting. The company has now launched a new design for AMD X570 users in the form of a monoblock belonging to its Quantum line of custom liquid cooling components.

Just like other EK monoblocks, the EK-Quantum Momentum ROG Strix X570-E D-RGB features a high flow design, which means it can be used in systems that include weaker or low-speed pump configurations too. Sophisticated addressable RGB lighting is integrated into the Quantum Momentum block and connects to standard 3-pin 5V motherboard ARGB headers. 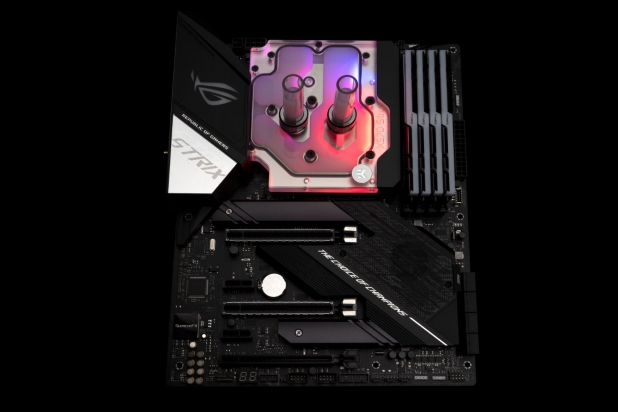 EKWB has made the new EK-Quantum momentum ROG StrixX570-E D-RGB available to pre-order through its own webshop and from partner resellers. The new monoblock will start shipping from 19th November priced at €139.90 MSRP.

KitGuru says: We have seen a number of new D-RGB addressable LED products from EKWB featuring 3-pin 5V connections in the last couple of weeks due to customer feedback calling for EK to change its RGB connectivity. It is great to see a big manufacturer like EKWB not only listening to customers, but updating products to suit their needs too.