Enermax has upgraded its ETS-T50 AXE CPU air cooler series with a new ARGB version. The T50 AXE cooler is available in various forms and now includes a new version with addressable RGB fans, available in both black and white colour schemes.

Enermax has added airflow optimisations in the T50 AXE air cooler such as conical tunnels to improve airflow by up to 15%, which allows heat to dissipate quicker. Small spoilers on the fan blades create a vortex that brings more fresh air to the back of the heatsinks heat pipes to aid cooling, while partially closed sides of the cooler create a vacuum to draw additional air in from the side. 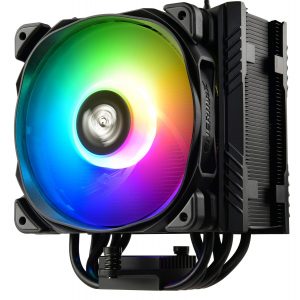 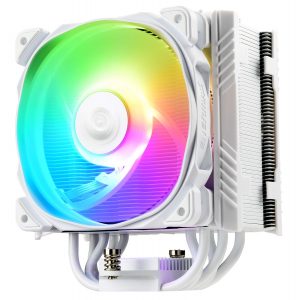 120mm fans used in the ETS-T50 AXE ARGB cooler are equipped with a high-pressure fan blade designed to be specifically used on CPU coolers. The fans also feature a patented Twister Bearing technology to ensure smooth operation and a long 160,000 hours MTBF lifespan. Speed range of the fan is 500 – 1600 RPM so users can balance cooling performance with noise levels depending on system workloads.

The Enermax ETS-T50 AXE ARGB CPU air cooler is compatible with all current Intel and AMD socket types (excluding TR4/SP3 socket). The cooler is available to purchase now priced at $64.99 for the white version.

KitGuru says: The 230W TDP rating of the Enermax ETS-T50 AXE ARGB cooler should be enough to cool even the most high-performance desktop processors. What do you guys think of this new CPU cooler from Enermax?