The new NZXT Z-3 AIO series is available in 280mm and 360mm variants that include a 60mm LCD display to provide unlimited visual customisation via the NZXT CAM software. The integrated LCD screen is capable of displaying system information as well as animated GIF images, giving PC enthusiasts an opportunity to express themselves in an innovative new way.

“We took great lengths to ensure that the newest generation of Kraken is the most visually appealing and highest performing AIO ever. The possibilities for customization with the Kraken Z are endless and I cannot wait to see what the community does with this potential,” said Johnny Hou, Founder and CEO of NZXT.

Just like the Z-3, NZXT’s new X-3 series is based on the latest Asetek design and improves on the signature NZXT infinity mirror appearance by enlarging the size of the pump head ring. An updated cap on top of the pump is rotatable to enable correct orientation of the NZXT logo no matter what position the pump is installed. Additionally, the NZXT RGB channel is built-in to allow for simple integration of other NZXT RGB products.

The X-3 AIO series includes 240mm, 280mm and 360mm versions for maximum compatibility with all types of ATX cases and PC builds. Both the X-3 and Z-3 series are compatible with mainstream desktop processor socket types such as Intel LGA 1151 and AMD’s AM4 platform.

NZXT has made both the Z-3 and X-3 series available to order in the U.S via the company’s website and official NZXT retailers, availability in other regions is expected in February. The X-3 series is priced starting from $129.99 for the 240mm Kraken X53 and the Z-3 series starts from $249.99 for the 280mm Z63.

KitGuru says: It will be interesting to see how the new AIO series from NZXT performs and whether the eye-watering $249.99 price tag of the Z-3 series is justified. What do you guys think? 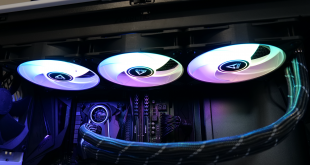