AMD's latest GPU, the RX 5600 XT, launched last week amid some controversy about the GPU's specs and BIOS updates. Today we are looking at another partner card, this time from Gigabyte. Their RX 5600 XT Gaming OC 6G is another card which has received a significant BIOS update, boosting both memory and GPU clock speeds, to enable significantly better performance when compared to stock specifications. Priced at £289.99 for this model, is it a card you should buy?

We've already been over the whole ‘BIOS situation' in our launch-day review of the RX 5600 XT, and while many of the points raised are still valid, we won't re-tread old ground in this review. Instead, we will be focusing on the Gigabyte RX 5600 XT Gaming OC card itself, looking at its performance relative to the Sapphire Pulse 5600 XT, as well as the RTX 2060 and RX 5700. We also take the card apart and test its cooling abilities. 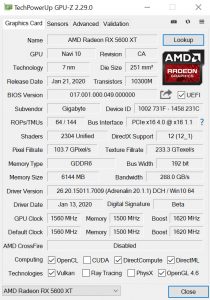 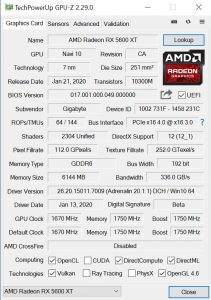 As with almost any RX 5600 XT that was available for the January 21st launch date, my Gigabyte Gaming OC shipped with the ‘old' BIOS, meaning the card ran at reference spec with a 150W power target, 1620MHz boost clock and 12Gbps memory. Gigabyte has released a public BIOS update to its website, updating the power limit to 180W, with boost clocks up to 1750MHz and memory now running at 14Gbps.

Those are the exact same values that were applied to the Sapphire Pulse model after it received its own BIOS update, so I wonder if these are the maximum values AMD's partners can now spec their cards to. At the very least, every other partner card I have seen online now has the same specifications (once the BIOS update has been applied, that is) so we can expect gaming performance to be very similar.