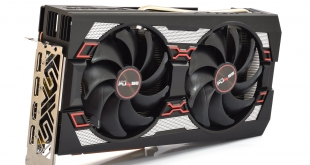 It has been a turbulent week for AMD's latest GPU. Announced at CES 2020, the RX 5600 XT was meant to take the fight directly to Nvidia's GTX 16-series product line, with a $279 MSRP and cut-down specs compared to the RX 5700. Thanks to a new BIOS update, however, pushed just days before the GPU's official launch, the 5600 XT is now positioned against the RTX 2060. What exactly has been going on, and is this GPU actually any good?

That product positioning was confirmed again when I sat in on an online press briefing for the 5600 XT, as AMD went into some detail about how the 5600 XT was very much a 16-series competitor and it was not designed to face up against the RTX 2060. Regardless, Nvidia was working in the background to make the RTX 2060 more competitive and render the 5600 XT DOA. First we saw EVGA's RTX 2060 KO priced at $299 (or $279 for early pre-orders), and then the official Nvidia product page dropped the Founders Edition price to $299/£275.

During this time, I had received my Sapphire Pulse RX 5600 XT model for review and started testing on Wednesday 15th, ahead of the launch on the 21st. The very next day – Thursday 16th – I received an email from AMD, saying:

‘SAPPHIRE will be providing a BIOS update for the Radeon RX 5600 XT graphics card, expected to be available this morning, January 16, European time. The update is expected to deliver increased performance and may impact your existing testing results.'

Initially I was confused – I'd already successfully completed most of my testing, the card's performance was more-or-less where I expected it to be (as we will see later on in this review), so I wasn't sure what was going on with a new BIOS being pushed out. I remember thinking that perhaps some reviewers had been experiencing issues, that cards weren't running as fast as they were meant to.

But that was not the case. What actually happened was, just five days before the official launch of the 5600 XT, AMD significantly adjusted some key specifications of the card. The power limit was raised from 150W TBP (total board power) to 160W TBP, with boost clock increasing from 1620MHz to 1750MHz, alongside a 2Gbps speed increase for the GDDR6 memory – up to 14Gbps, from 12Gbps. 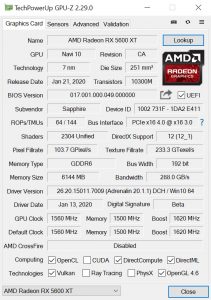 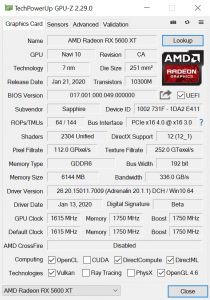 Here is the official statement from AMD regarding this change:

‘Based on ongoing testing with our board partners, we have raised the GPU core and memory frequencies for overclocked Radeon RX 5600 XT SKUs to take advantage of increased thermal and electrical headroom built into partner’s custom designs. The updated VBIOS has been made available to our board partners for inclusion in select OC SKUs at launch. AMD is dedicated to disrupting the market with industry-leading compute products, and the new VBIOS makes the Radeon RX 5600 XT an even more powerful contender for high-performance 1080p gaming. Previously announced product specs are unchanged, as they remain AMD’s recommended reference design specs.'

Upon further clarification from AMD, the updated BIOS only applies to factory overclocked cards. In other words, reference spec of the card remains unchanged, as it was announced with 12Gbps memory and lower boost clocks. Now, if AMD's partners wish to do so, they can make use of the new BIOS to get better performance for their factory overclocked models. This means there may still be some cards which adhere to the reference spec, but this is up to each manufacturer to decide.

Either way, in all the time I have been reviewing GPUs for KitGuru – and speaking with Allan Campbell, Editor in Chief who previously reviewed GPUs for KitGuru – neither of us can remember such a significant or late change to a graphics card's specification. I'd go as far to say that this is an unprecedented move from AMD. Clearly the company felt the need to respond to Nvidia's price cuts of the RTX 2060, so short of dropping the already announced $279 MSRP, AMD did what it could to make its cards run faster.

Aside from the immediate increase to performance, which we will observe throughout this review, this move has several implications. First, and I confirmed this with a number of AMD's partners, is that there is already existing 5600 XT stock in the channel ready to be sold on the 21st. There is no way to now update the BIOS on those cards, so the responsibility will fall on the consumer. This is far from ideal – firstly, the end-user would have to know that the BIOS needs updating. They would also have to be comfortable doing it themselves, and even though it is a simple process, things can easily go wrong.

To prove that last point, I can share from my personal experience. I received three 5600 XT cards – the Sapphire card, I updated successfully and saw increased memory and clock speeds. However, I also updated a Gigabyte model too, which saw increased clock speed but memory speed was unchanged. Lastly, I also received an MSI card which simply would not update the BIOS due to a ‘subsystemID mismatch' issue. MSI later sent us a second BIOS, but got in touch to say that a third BIOS would be arriving in the next couple of days, as the second one was also not final.

Three cards, three varying levels of success. To be clear, I am not blaming the partners here. To my mind, AMD pushing a new BIOS only five days before the launch has somewhat pulled the rug out from the AIB's feet. Of course, AMD may say that the BIOS update is optional and up to each manufacturer, but realistically if one company does it, they all have to do it or their card is going to perform noticeably slower.

If these specifications had been announced at CES 2020, or even if the cards had arrived with the new BIOS and we were simply told that specs had been updated since the announcement, this would not be an issue and we could've got on with testing no problem. The issue is that the update was so last-minute, everyone was left scrambling to catch up.

Above we have a table of key specifications for the card. These are the reference figures, which according to AMD remain unchanged. Our Sapphire Pulse card in for review, however, has received the new BIOS and is a factory overclocked model. Its rated boost clock is 1750MHz, with a game clock of 1615MHz, while memory clock is now 14Gbps. That last change is enough to raise memory bandwidth from 288GB/s to 336GB/s, a 17% increase.

I wasn't initially sure how much difference the new BIOS would make, but considering I'd already tested the card with the original (reference spec) BIOS, we can directly compare results in this review.