Today at CES 2020, AMD officially welcomed the newest member to the Radeon RX 5000 series of graphics cards- the RX 5600 XT. Described as “the ultimate 1080p gaming card”, it features the RDNA (Navi) architecture, 36 Compute Units and 6GB of GDDR6 memory. 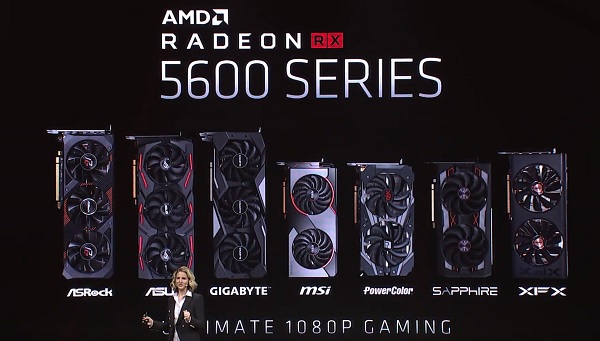 The RX 5600 XT is launching worldwide on the 21st of January, with the suggested retail price sitting at $279. Board partners will be releasing custom-cooled variants on that same date, although pricing will likely vary from there.

AMD didn't expand much on its laptop GPU plans, but it did confirm that the Radeon RX 5700M and RX 5600M will be launching this year with the goal of delivering high-performance mobile gaming. Laptops with these GPUs will be available in the first half of 2020, so we shall see more fully AMD powered laptops in the months to come.

KitGuru Says: The RX 5600 XT is officially here and we have laptop GPUs to look forward to next. Hopefully later in the year, we'll also see AMD lift the curtain on ‘big Navi'. Are any of you currently planning a GPU upgrade? What do you think of the RX 5600 XT so far?