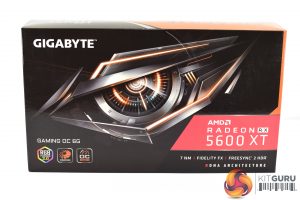 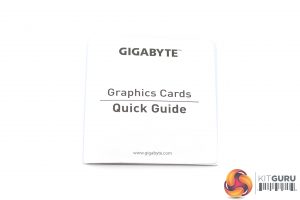 Inside, the only included accessory is a small quick start guide. 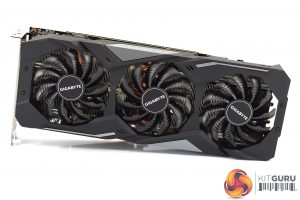 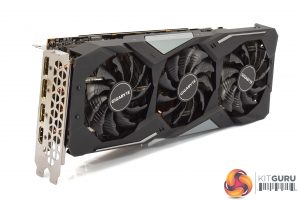 As for the card itself, we’ve reviewed a number of Nvidia-based cards from Gigabyte over the last year and the same overall design is used here – meaning the card is a relatively plain model, with a black plastic shroud complemented by some grey accents.

Gigabyte is also using its Windforce 3X cooler, with three 80mm fans. As we’ve seen previously, the middle fan spins in reverse relative to the outer fans, which Gigabyte says reduces any turbulence and enhances ‘the airflow pressure.’ 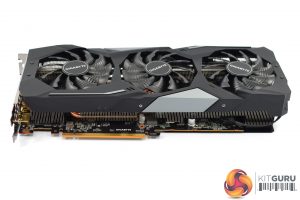 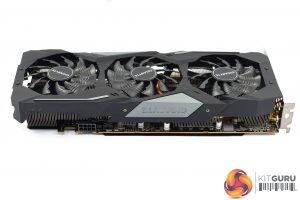 In terms of the overall size of the card, too, it’s not huge by modern standards, measuring 279.85 x 114.35 x 49.55 mm. It may cause issues for some extra-small ITX chassis due its length and the fact it is slightly thicker than a standard dual-slot card, but most users should have no issues here. 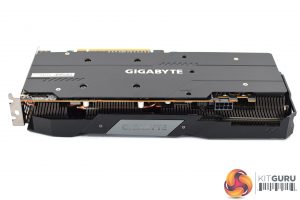 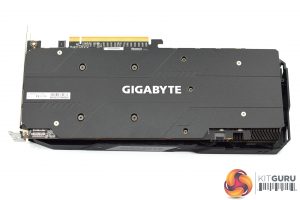 The front side of the card is home to a small grey section, with the Gigabyte logo barely visible with that piece of the shroud. This is the only RGB zone on the card, controllable via Gigabyte’s Aorus Engine software.

As for the backplate, this is a full-length design with no cut-outs whatsoever. It is made of aluminium, too, so it is reassuringly sturdy, and apart from the Gigabyte logo in the middle it is otherwise left bare. 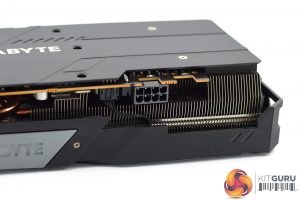 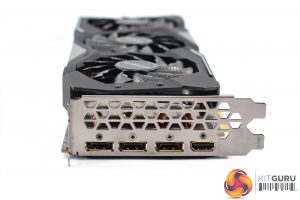 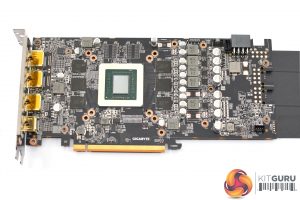 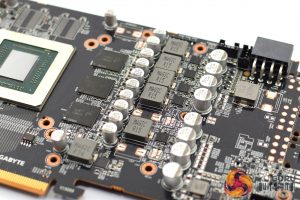 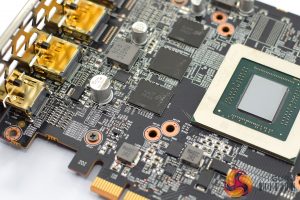 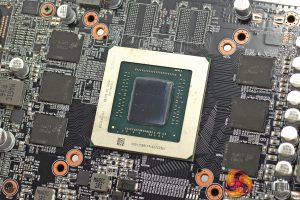 Removing seven screws gets us access to the PCB, and we can see Gigabyte has opted for a 5-phase VRM for the GPU, while the memory is served by a single phase. The empty spaces left on the PCB suggest this is the same board design Gigabyte used for its 5700-series of cards.

We can also get a look at the memory, these are ‘D9WCW’ modules from Micron, specified at 14Gbps. Before the BIOS update, memory speed was set at 12Gbps, but the update has adjusted this to 14Gbps for this card. 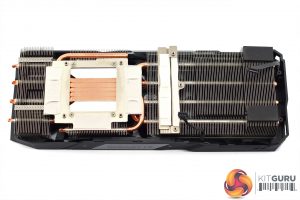 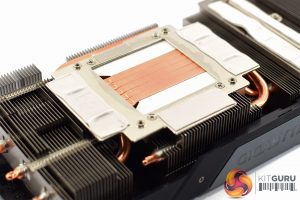 Finally, as for the cooler, this is comprised of three fin stacks, connected by a total of 5x 6mm copper heatpipes. These pipes make direct contact with the GPU die, while there is a separate plate for the VRAM and another for the VRM as well.