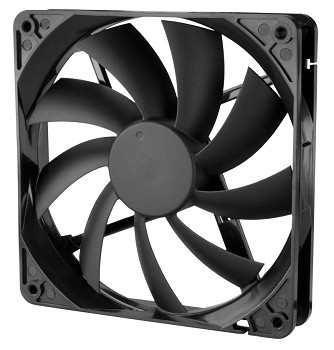 The fan included with the Corsair H90 is a 140mm ‘high Torque’ fan which spins at 1,500 rpm. This fan is designed to push a lot of air through the large radiator – Corsair claim a maximum 94 CFM, although it is unlikely to be running at 100% most of the time. 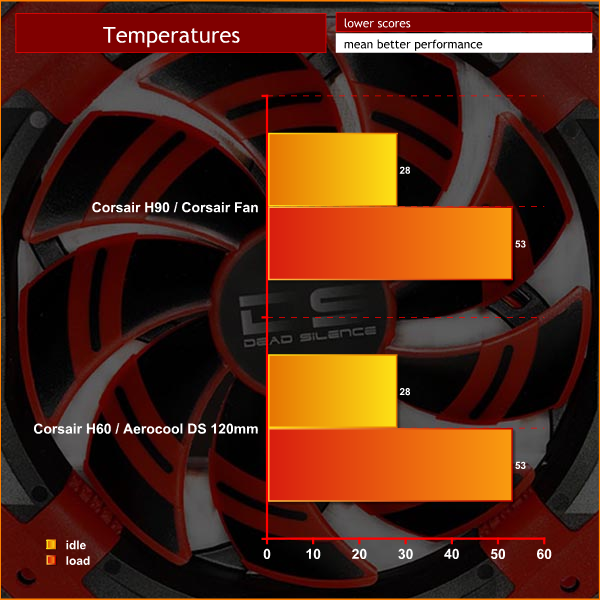 Even though the AeroCool DS Dead Silence 140mm fan is spinning slower than the Corsair fan, the temperatures are evenly matched, peaking at 53c.

We can only accurately measure down to 28dBa with the noise meter in our environment, so anything better than 28dBa cannot be accurately recorded in our tests. That said – anything rating at 28dBa in our graphs is going to be realistically ‘almost silent’ in the real world. 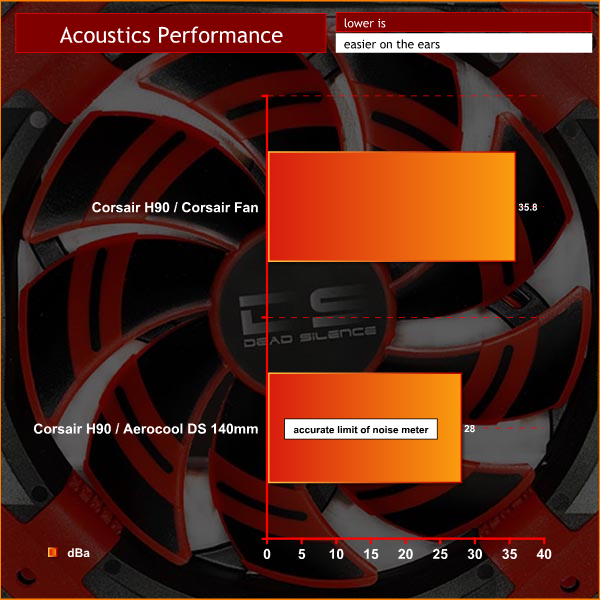 The Corsair fan can be clearly heard under load, emitting almost 36dBa – clearly audible and moderately intrusive. The 140mm Aerocool DS Dead Silence Fan by comparison is again extremely quiet. The AeroCool DS 14mm is rating right at the accurate limits of our noise meter, meaning it is probably well below the 28dBa rating we can present today.

Our findings show that while cooling performance between the 140mm Corsair fan and the 140mm AeroCool DS Dead Silence fan is almost identical, the noise differences are once again considerable, in favour of the Aerocool unit.

AeroCool rate the 120mm unit at 15.8dBa at 12V and 12.1dBa at 7V. We really are not in a position to verify either of these claims, but we can say the DS Dead Silence Fan is almost silent, even with our ear 3 inches away from the blades during operation (be careful if you do this yourself!).