Advanced Micro Devices initiated revenue shipments of its new “Carrizo” accelerated processing unit in the first quarter of this year. The chips have been validated by PC makers and they are on-track to introduce systems powered by the latest A-series APUs in the second quarter of 2015.

“We also successfully passed several key milestones in the [first] quarter as we prepared for the introduction of our new 2015 APU and GPU products, including first revenue shipments of our next-generation Carrizo family of notebook APUs in advance of system launches planned for the second quarter,” said Lisa Su, chief executive officer of AMD, in the company’s quarterly conference call with investors and financial analysts.

The company declined to reveal when exactly it started to ship its new APUs, but said the first shipments were “small” in terms of volumes. Nonetheless, it is still noteworthy that the new accelerated processing units are already in mass production and have been validated by PC makers.

AMD’s code-named “Carrizo” APU was developed from the ground up for ultra-thin notebooks in mind. The chip was designed using high-density libraries of elements and AMD engineers used a number of tricks to reduce leakage and cut-down power consumption. The chip is also made using a 28nm process technology optimized for minimum power consumption. In addition, “Carrizo” incorporates voltage adaptive operation, or, adaptive voltage and frequency scaling (AVFS) technology, which adjusts frequency and voltages of different parts of the APU in real-time. Finally, “Carrizo” features a new S0i3 power state, which achieves the same power level as the S3 state (standby), but can be activated on the fly under the control of power management at sub-second time frames. 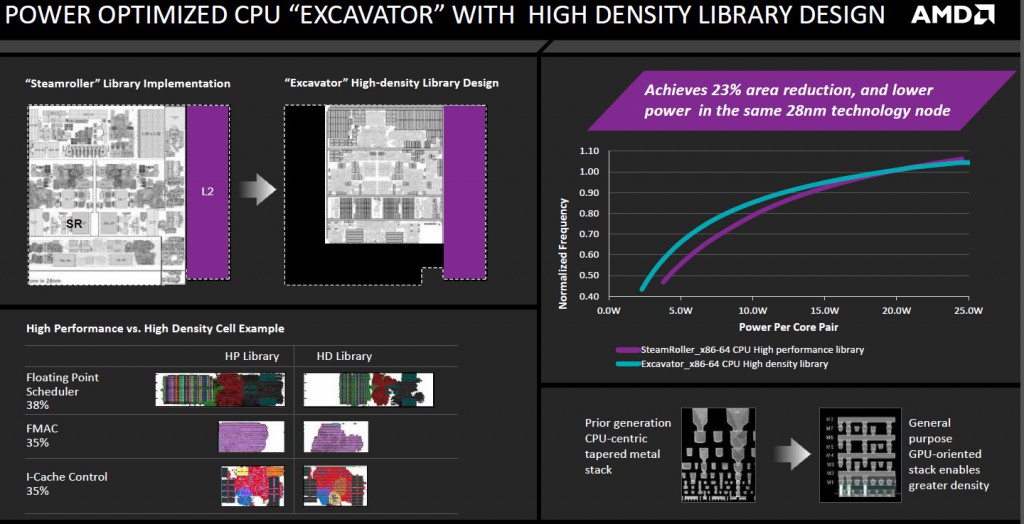 Since “Carrizo” was primarily designed with notebooks in mind, it has a number of limitations when it comes to performance as well as frequency scaling. To minimize power consumption, AMD did not enhance any component of the APU to maximize its performance. Due to low-power 28nm process technology as well as very dense design, the “Carrizo” chip will not be able to run at truly high frequencies. As a result, while the “Carrizo” may be a great APU for low-power mobile devices, it will not scale beyond that market. 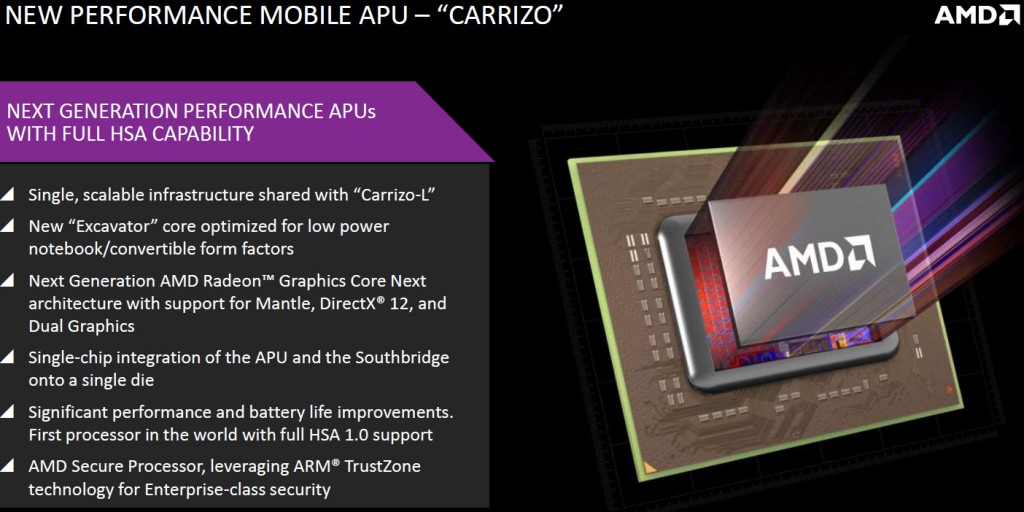 It is unclear when exactly AMD and its partners plan to formally launch “Carrizo”-based products, but it is clear that either before or at the Computex 2014 trade show in early June.

KitGuru Says: AMD’s “Carrizo” APU seems to be pretty impressive. It will hardly help AMD to recapture a lot of market share from Intel Corp. because the latter ships plenty of ultra-low-power system-on-chips that are probably even more energy-efficient than “Carrizo”. Nonetheless, high-profile design wins could bring AMD revenue that it badly needs. The question is, how many design wins does “Carrizo” have…