As reported earlier this year, Intel Corp.’s highly-anticipated code-named “Devil’s Canyon” family of chips designed for overclockers consists of three microprocessors: a Core i7, a Core i5 and a Pentium. The latter was named the Pentium “anniversary edition”, but its specifications remained a complete mystery until today.

Chinese version of the VR-Zone web-site has published a screenshot from CPU-Z utility, which reveals key specifications of the Pentium G3258 “20th anniversary edition” central processing unit. Without any surprises, the new Pentium chip will have two cores (based on the Haswell micro-architecture) short of the Hyper-Threading technology, 3MB of cache, 3.20GHz clock-rate (no Turbo Boost), integrated graphics core, unlocked multiplier, LGA1150 form-factor as well as 53W thermal design power. The chip will feature improved thermal interface between the die and the heat-spreader, which will enable better overclocking. 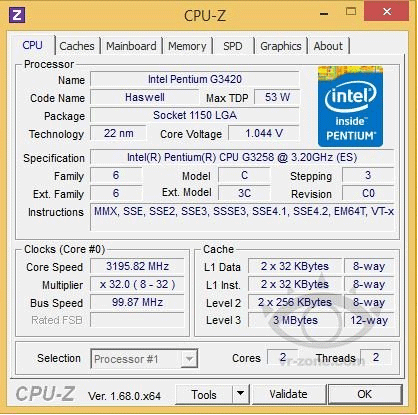 Unlike its Pentium-branded ancestors from the nineties and the early 2000s, the Pentium G3258 will not be a performance champion. The chip will be a nice option for an overclocker in budget thanks to unlocked multiplier and the new thermal interface, but it will certainly not be a dream of a performance enthusiast.

KitGuru Says: The reason why Intel called the Pentium G3258 as the “20th anniversary edition” is completely unknown. The very first Pentium processor was released in March, 1993, so the new chip is more than a year late for the brand’s 20th birthday…

Previous Sony has no plans to sell or shut down TV business
Next Samsung is developing its own VR headset, plans to start sales in 2014