AMD AM1 launch – Kabini brings APU to the masses

One of the more surprising things about the way the world has changed since the advent of the network and tablet PC revolutions, is the way that desktops are holding their own. Sure, it's more of a gentle decline that the rampant growth we experienced in the past, but it is still a significant chunk of the world market for computers. AMD is launching the Kabini family of processors, with the promise that this will make entry level systems better. KitGuru goes into the detail to see if the delivery matches the promise.

In the wake of Intel doing the world's smallest announcement that it will be bringing a new Atom called Braswell to market in the near future, details have been sparse on the ground. When Intel's Senior Vice President for the PC client group, Kirk Skaugen, spoke with developers in China at the start of April, all he said was that “It will be better and cheaper than our current offer”.

AMD, on the other hand, has been a lot more forthcoming about the detail underpinning it's attack in the ultra-affordable market, codenamed Kabini and with the street name ‘AM1'.

We will go into the details of the technology soon enough, but let's take a quick look at the TAM (Total Available Market) for this kind of product in 2014, based on data from IDC, AMD and Intel.

So how will the desktop market split this year between low, medium and high cost systems?  Well this chart explains it in a simple enough way. When you look at the size of the pie slices, bear in mind that Intel thinks the whole pie is more than 300 million units this year. On that basis, Kabini is aiming at a market of around 115 million units. 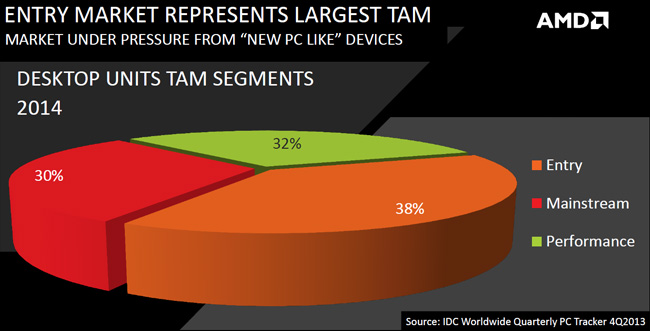 Previous Borderlands the Pre-Sequel is official
Next Kaspersky: Financial malware attacks rose to 28 million in 2013