Some shocking news into KitGuru HQ just now, says that AMD’s Senior Vice President and General Manager, John Byrne, will be leaving the company. What makes a top executive, with over 25 years’ experience in senior positions, leave a company like AMD?

Byrne was promoted from Chief Sales Officer to the company’s number two role in June, but was known to have had his eye on top slot – which went to Dr Lisa Su.

Despite Byrne’s sales force regularly delivering over $5 billion in sales revenue, the company decided that it wanted to be engineering-led, which is certainly an interesting proposition.

Whatever the underlying reasons, Byrne has been involved in the technology sector since 1988 and his experience will surely be missed.

As well as his direct experience, AMD will also be losing a key contact for many of the world’s largest electronics manufacturers. Byrne has been AMD’s key man for major relationships (like Apple) since being appointed VP/General Manager for the Americas in 2011.

He was also a member of the core team that helped AMD restructure into a company that has (a) cash on hand and (b) clear strategy to move away from the markets of the past – preparing for a future where traditional technologies like desktop CPUs and GPUs will have less and less importance in the market.

If we’re reading between the lines properly, then it seems that AMD has been preparing to ‘go dark’ in a number of ways over the next 12 months or so, paring back as much as possible in preparation for large scale launches in the future. On the other hand, Byrne’s style is more energetic – focused on ways to expand a company’s sales dynamically.

It’s possible that the two psychologies won’t be compatible until 2016, so maybe that led to a split.

Then there’s the classic ‘family reasons’ possibility. Having started a family last year, Byrne may opt to take time off to spend with them.

Whatever the underlying reason, we’re sure that there will be no shortage of suitors for Senior Vice President, from a Fortune 500 company, with Byrne’s experience in the technology sector. 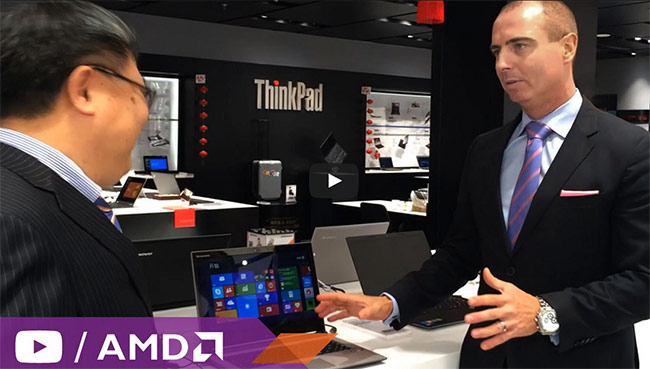 KitGuru says: While we understand that there is a position on the board at Glasgow Rangers, hot favourites for Byrne’s signature must be Dell and Lenovo – both of which are significantly larger than AMD or Rangers.

What does this mean for AMD?  Let us know over on Facebook.