Intel has announced that it will discontinue its 8th Generation Core desktop processors. The CPU lineup was officially discontinued as of June 1, but it will take some time before it's completely phased out.

The announcement from Intel was made through a Product Change Notice (PCN), which reveals that the 8th generation Core desktop processors have been discontinued as of June 1. That said, it is still possible for suppliers and OEM costumers to order the last remaining Coffee Lake CPUs until December 18, 2020, with the last shipment of said processors slated for around June 4, 2021. 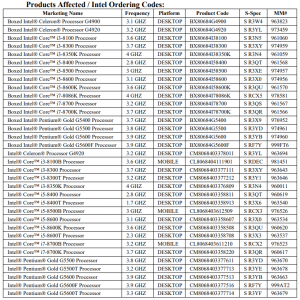 The Coffee Lake chips made their debut almost three years ago and sported up to six cores in the flagship i7-8700K, which was designed to take on 1st Gen Ryzen. Since then, both Intel's 9th and 10th Gen processors have made their way to the market , so it isn't too surprising that the chipmaker has chosen to discontinue the 8th Gen parts,

The PCN, with full details, can be found HERE.

KitGuru says: Let's look forward to upcoming processors from both AMD and Intel and hope that they will bring even better performance. What are your thoughts on Intel's 8th generation Core desktop processors being discontinued?