AMD’s 3rd generation Ryzen Threadripper high-end desktop platform will be launching later this month, so it is time for motherboard manufacturers to roll out new products in support of this next generation of HEDT processors.

Asus will initially launch three motherboards to support the new AMD Ryzen Threadripper CPUs and has announced details of what the new lineup will include. The first bunch of motherboards from Asus for AMD Threadripper 3000 will be the Asus ROG Zenith II Extreme, Asus ROG Strix TRX40-E Gaming and the cost-effective ASUS Prime TRX40-Pro.

The new range of motherboards are set to come packed with improvements and new features such as PCIe 4.0 to assist gamers, enthusiasts and professionals to unleash the potential of AMD’s 3rd generation Ryzen Threadripper processors. PCIe 4.0 offers double the bandwidth across a total of 64 PCIe lanes to bring even faster SSDs, graphics cards and AV gear to the high-end desktop platform for the first time.

TRX40 will also offer support for up to 256 GB of 3200 MHz RAM across eight DIMM slots which will feature in the new Asus lineup. The Asus ROG Zenith II Extreme is a high-end motherboard for the new platform and will bring users features such as a 16 phase power stage design, including a semi-passive VRM cooling solution which is ideal of overclocking. The Zenith II Extreme will also be packing five M.2 slots, eight SATA ports, 10 GbE Ethernet, Wi-Fi 6 and Bluetooth 5 support. Along with USB 3.2 Gen 2×2 Type-C connectivity, two USB 3.2 Gen 2 headers and four USB 3.2 Gen 1 ports. 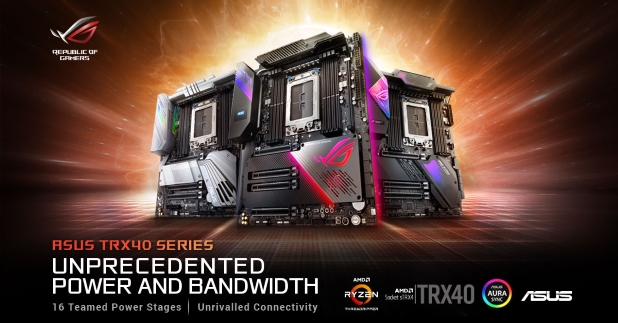 Asus is marketing the Prime TRX40-Pro as a reliable foundation for high-end desktop enthusiasts, capable of producing creative workloads such as video editing and 3D rendering, which will benefit from the many cores Threadripper will bring. The 16-stage power delivery solution will be cooled by a passive aluminium heatsink design in the Prime TRX40-pro. The Prime motherboard sports three M.2 slots with the benefit of PCIe 4.0 bandwidth, three USB 3.2 Gen 2 Type-A ports and a reversible USB 3.2 Gen 2 Type-C port for connecting fast external storage.

Pricing information has not been determined just yet. However, all three new TRX40 motherboards from ASUS will be available in November in the UK.

KitGuru says: With 3rd generation AMD Ryzen Threadrippper due later this month, expect a barrage of new motherboards supporting the new high-end desktop processors to be announced in the coming days from various manufacturers. What do you guys think to the initial lineup of new TRX40 motherboards from Asus?