The top four Xeon W-2200 processors will effectively share the same characteristics as Cascade Lake-X, with the flagship Xeon W-2295 being an eighteen core thirty-six thread beast and a 165 W TDP. However, the Xeon W-2200 series will include a lower-performing range. At the bottom of the line is a W-2223 with just four physical cores and eight threads.

The biggest differentiator between cascade Lake-X and the top four Xeon W-2200 processors, as far as we can see, will be Xeon W-2200 offering support for the Intel vPro platform. This means the Xeon W-2200 series will be capable of supporting up to 1 TB of ECC memory compared to Cascade Lake-X 256 GB of non-EEC memory support.

The Xeon W-2200 series will support Deep learning boost, thunderbolt 3, 2.5 G Ethernet and Wi-Fi 6 just like Cascade Lake-X. Another similarity between Xeon W-2200 and Cascade Lake-X is price, specifically, being substantially less than previous generations. The flagship Xeon W-2295 will cost $1333, compared to the W-2195 at $2553, the new CPU will be almost half the price of the previous generation. 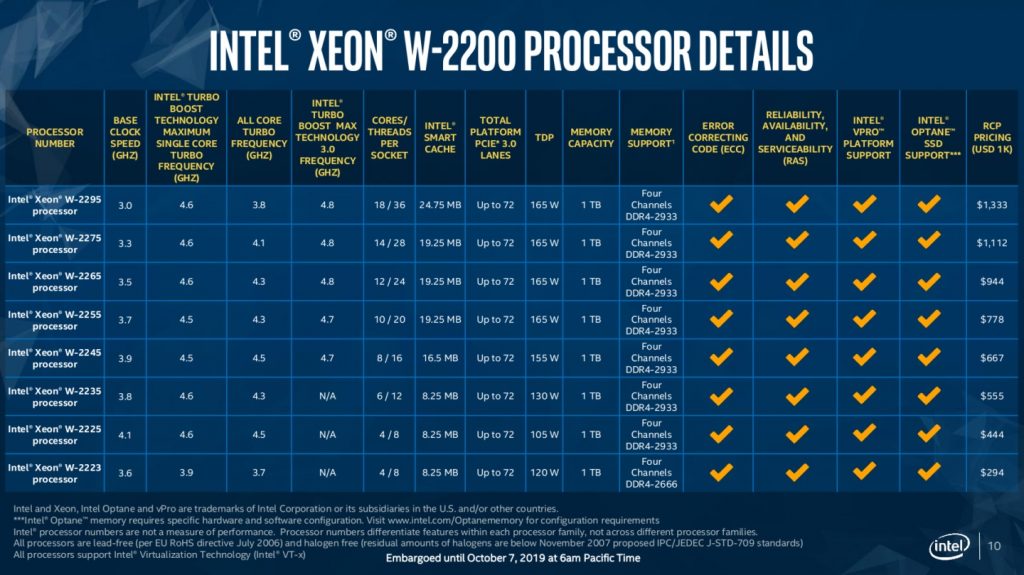 The new Xeon W-2200 processors are expected to be released in November, however we are still awaiting confirmation from Intel on an official date.

kitGuru says: Just as we saw a couple of weeks ago with Cascade Lake-X, intel has slashed the price of the upcoming Xeon W-2200 series. Since these are from the same architecture family, it makes sense. We are looking forward to what AMD brings to the table next and hope the price wars continue.