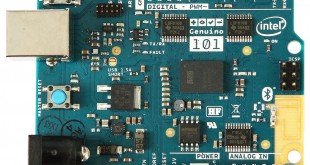 The Genuino 101, or Arduino 101 if you're in the US, is Intel's collaboration with the Arduino project. If you're not familiar with it, the Arduino has attempted to do for hardware design what Linux and Open Source in general have done for software – open it up to everyone to be a creative producer rather than just a consumer. Since the project's inception in 2005, hundreds of thousands of boards have been sold, with the total at 700,000 by 2013, and it’s likely to be in the millions by now. So when a heavyweight like Intel comes on board, too, you know Arduino “maker culture” has come of age.

The easiest way to describe the Genuino 101 is that “it's a bit like the Raspberry Pi“. Except that it isn't. Where the Pi is a tiny, cheap, programmable computer able to run a full operating system, the Arduino is more like a programmable co-processor, for creating low power devices that react to their environment.

Like the Pi, it's potentially great for teaching programming to kids, and you can achieve similar end results. But from the outset it was designed as a computerised controller for hobbyist engineering, spanning the gap between the worlds of software and physical inputs and outputs.

There are now umpteen variants on the Arduino, with special capabilities and form factors, plus a host of “shields” that fit onto the primary board to extend its capabilities. However, Intel's Genuino 101 is the most powerful to hit the market, with two different processor cores and a variety of sensors already built in.

As an aside, this board is called Genuino 101 outside the US due to a trademark dispute between original members of the Arduino development team in Europe. We put the Genuino 101 through its paces with some example “scratch” code. 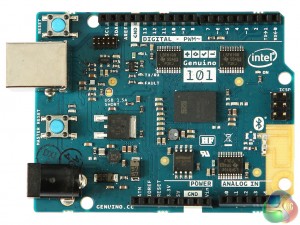 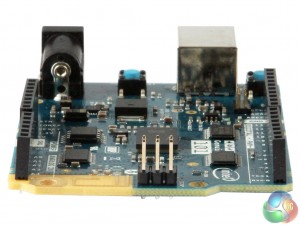