Maker culture was all the rage a few years ago. But although people aren’t talking about it quite as much as they were, this is because we’ve got used to the idea of 3D printers and cheap do-it-yourself electronics like the Raspberry Pi, Arduino, and now BBC Microbit. The key point about the Arduino is that the core design is open, and has been through umpteen iterations and customisations – a total of 17 commercial implementations at the time of writing.

The capabilities have been further enhanced by the additions of the Shield add-on boards, with features like GPS receivers or LCD displays, and these can even be built up yourself using individual components. The Genuino 101 is a core Arduino control board, using Intel’s Curie platform. But it has lots of great features built in, before you even need to extend things with a Shield, and that’s what makes it a special and particularly interesting new member of the Arduino family. 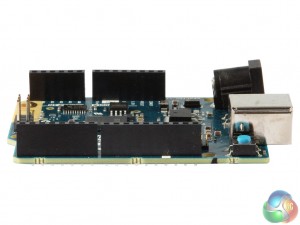 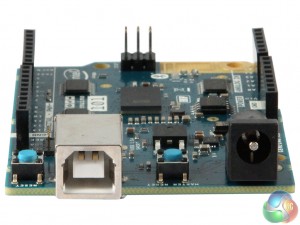 You don’t get much in the box for your £30, although £30 isn’t much to spend anyway. In fact, only the Genuino 101 board itself is supplied, inside an anti-static bag. There isn’t even a power supply included. This might seem a little much to pay, when the Raspberry Pi 3 is the same price and that’s a much more powerful system, with a 1.2GHz processor, 802.11n WiFi, Ethernet and the ability to drive the monitor and keyboard.

But as we explained in the introduction to this article, the Arduino isn’t the same kind of beast as the Raspberry Pi, and the Genuino 101 particularly so. The Arduino is for testing, prototyping and learning with the potential aim of developing ideas for the next generation of “ubiquitous computing” devices, such as wearable computing or the Internet of Things.

So it’s designed for low power, simplicity, and the most integration possible. 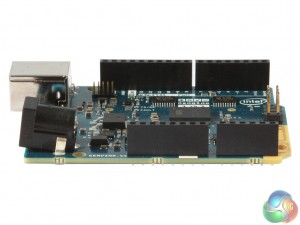 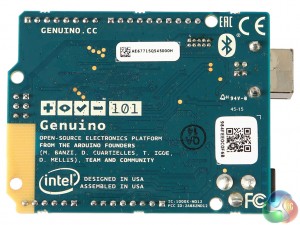 The Genuino 101 takes this another step forward. Most functions can be added to an Arduino with the judicious use of a Shield or some electronic components. But a couple of the most interesting and useful options come as standard with the Genuino 101. There’s a Bosch BMI160 six-axis accelerometer and gyroscope, plus a Nordic nRF518 Bluetooth chipset, feeding into the 32-bit DSP sensor hub that forms part of the Intel Curie system.

The Curie chipset also includes a 32MHz, 32-bit Intel Quark processor, which is accompanied by 80Kb of internal SRAM, 384Kb of Flash RAM, and 2MB of Flash RAM, with the latter connected internally via a USB interface.

These allocations are all way beyond regular Arduinos. For example, the UNO has an 8-bit processor with just 2Kb of SRAM and 32KB of Flash RAM, so much more complex code will be possible with the Genuino 101.

The core features are there, of course. There’s a power port capable of receiving anything from 7V to 18V. The USB interface is just 1.1 standard, but this will be fine for uploading program code and downloading live sensor information. There are 14 digital Arduino headers, four of which provide power, and six analog inputs for analog-to-digital conversion applications. Four LEDs are built into the board for various functions, including testing whether things are working and simple applications.