As we’ve come to expect from Intel’s CES 2022 keynote, the company announced new 12th Gen Core processors. Out of the 50 new processors introduced during the keynote, 22 are targeted at desktops, while the remaining 28 are for laptops.

Ranging from the entry-level Pentiums up to Core i9 powerhouses, Intel introduced a total of 22x new desktop processors. Like the K and KF processors, the 12th Gen Core non-K, T and F series CPUs are based on the Alder Lake platform, featuring the same hybrid architecture with support for DDR4/5 memory and Intel Graphics 700 series (except the F series). As per usual, the T processors have a 35W TDP, boosting up to 106W depending on the processor. The non-K and F processors come with a 46-65W TDP and a maximum turbo power of 202W.

To complement the launch of the new Core processors, Intel also introduced the new motherboard chipsets: H670, B660 and H610. Unlike the Z690, none supports CPU overclocking, but memory overclocking is enabled on H670 and B660 boards. Connectivity-wise, the H670 stands just a tad below the Z690, packing the same amount of PCIe 4.0, slightly fewer PCIe 3.0 lanes and USB ports. The B660 should be the go-to solution for entry-level gamers, featuring everything the average user might need. As for the H610 boards, these are targeted at basic users, as seen by the single memory channel and lack of PCIe 4.0 lanes.

Moreover, Intel has finally unveiled the new box coolers coming with these new processors. The RS1 cooler is the entry-level that will accompany Pentium and Celeron processors. Then, the similar RM1 cooler (added blue halo around the top of the heatsink) comes with the i3, i5 and i7 processors. At last, there’s the RH1 cooler for the i9 CPUs, featuring controllable ARGB lighting and a bigger heatsink.

The 12th Gen Core H processors for enthusiast laptops come in a 45W TDP package, boosting up to 115W when needed. This series consists only of i5, i7 and i9 processors that can clock up to 5GHz and feature up to 14 cores (6 P-cores and 8 E-cores) and 20 threads. At the top of this series, there’s the i9-12900HK, offering 28% more gaming performance than the i9-11980HK. In 3D rendering workloads, users can expect up to 43% more performance from 12th Gen Core CPUs over their predecessors. 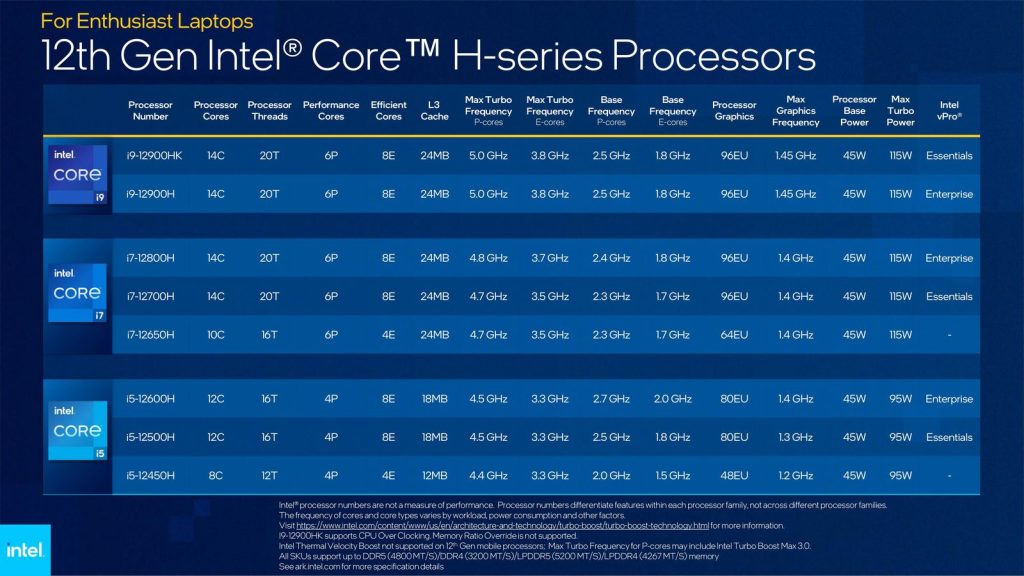 Memory support on the 12th Gen Core H series was extended to be compatible with DDR5/LPDDR5 and DDR4/LPDDR4 modules clocked up to 4800MT/s. Moreover, there’s integrated Intel Wi-Fi 6E (Gig+) connectivity, iGPUs with up to 96EUs, and support for Thunderbolt 4 ports capable of transferring data up to 40Gbps.

Besides the H-series for laptops, there’s also the P and U-series processors. The P-series processors come in a 28W TDP package that can increase to 64W, offering up to 4.8GHz clock speeds. Like the H-series, these processors pack up to 14 cores, 20 threads and an iGPU with up to 96EUs. This series consists solely of i3, i5 and i7 CPUs.

As for the U-series, there’s the 9-29W and the 15-55W processors. Featuring up to 10x cores and 12x threads, these processors pack iGPU with up to 96EUs and can reach maximum clock speeds of 4.7/4.8GHz, despite their low power consumption.

KitGuru says: Are you planning to buy a new laptop or build a new desktop soon? With the expanded 12th Gen Core lineup, there should be new options to consider when choosing the specifications of your next system.