Earlier this week, Intel officially announced its new 11th Gen Core processors, including Core i9 K and KF SKUs with a new frequency boost feature called Adaptive Boost Technology. Now, Intel has explained how Adaptive Boost works to bring all cores up to 5.1GHz as long as power and cooling requirements are met.

In past generations, Intel has used multiple boosting technologies for its processors, including Turbo Boost 2.0, Turbo Boost 3.0, and Thermal Velocity Boost (TVB). The boosting method used depends on the number of cores available, so in two-core workloads, TVB kicks in and boosts up to 5.3GHz as long as there is enough power delivery and cooling to keep the CPU below 70ºC. Once three or four cores are being used, a 5.1GHz boost is used across all cores. 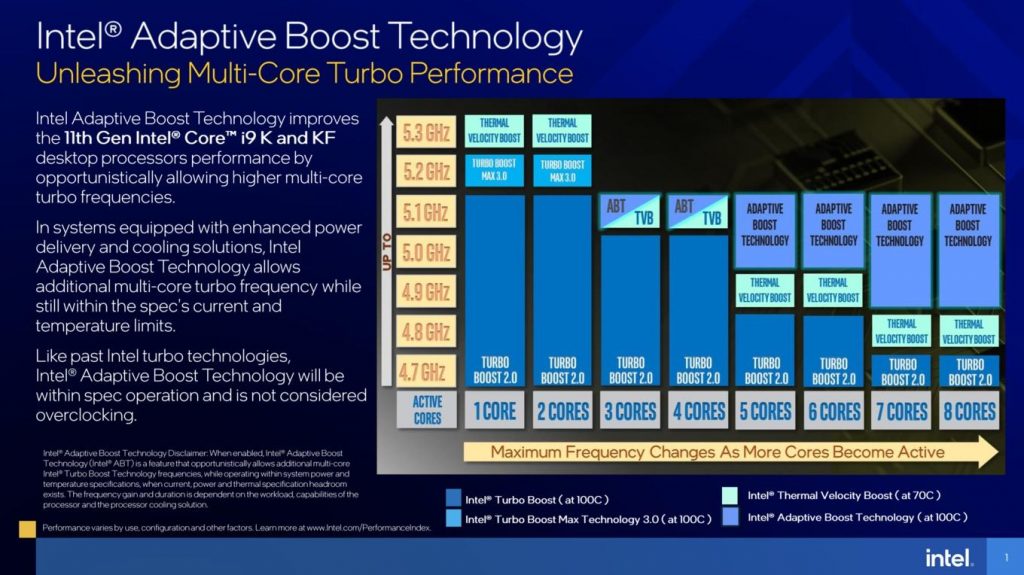 As per the Intel presentation slide shared by HardwareLuxx, in workloads using three or four cores, the Intel Core i9-11900K or its KF counterpart can utilise either Thermal Velocity Boost or Adaptive Boost to reach a 5.1GHz boost speed. Once four to eight cores are being used, Adaptive Boost kicks in to reach up to 5.1GHz across all of those cores. However, the processor must meet certain power requirements and have appropriate cooling to avoid thermal throttling. In the case of ABT, the CPU must be kept below 100ºC, which seems like common sense for any healthy PC.

KitGuru says: Are any of you planning on building a new PC with an Intel 11th Gen processor? Will you be picking up a Core i9 SKU to take advantage of TVB and ABT boosting?