It looks like we have an early idea of when to expect AMD’s new EPYC processors, alongside some performance comparisons to various Intel counterparts. This week, AMD’s press deck for the EPYC 7000 series leaked, showing that the launch is planned for the 20th of June, alongside various headline features of the platform.

This particular leak comes our way from the folks at Videocardz, who were able to get hold of the leaked presentation. According to their report, the EPYC 7000 series will offer up to 32 high-performance Zen cores, 8 DDR4 Channels per CPU, up to 2TB of memory per CPU, 128PCIe lanes, a dedicated security subsystem, an integrated chipset and both single and dual socket designs. 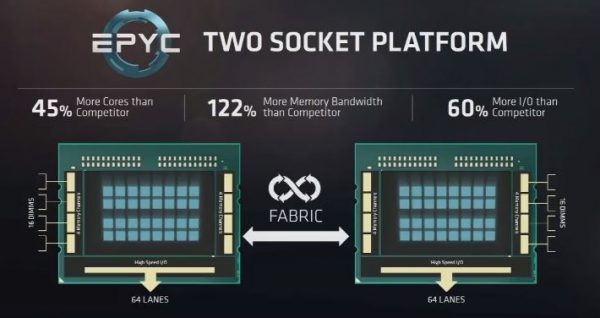 Interestingly, the $800 EPYC 7301 has the largest advantage with a 70 percent boost over Intel’s E5-2640 v4. These performance matchups were all performed on EPYC single socket VS Intel single socket. However, we don’t have details on what benchmark was being performed to get these numbers, so it’s best to wait for more information and independant testing on that front.

KitGuru Says: AMD’s EPYC CPUs appear to be launching very soon. AMD’s internal numbers look good but we do need to see some independent testing and figures before coming to conclusions.