Just two weeks ago on the first day of Computex, AMD unveiled the Ryzen 3000 series, complete with Zen 2 architecture, built on the 7nm process and with options all the way up to 12-cores. What we didn’t know at the time was that AMD was holding a little something back. Today, AMD announced the Ryzen 9 3950X, the top SKU in the 3rd Gen Ryzen lineup with 16-cores and 32-threads.

AMD is touting this as the world’s first 16-core gaming CPU. While previously users would need to adopt a much larger Threadripper chip to gain this many cores and threads, AMD has now been able to shrink it all down into a much smaller package, suitable for more mainstream X570 motherboards. 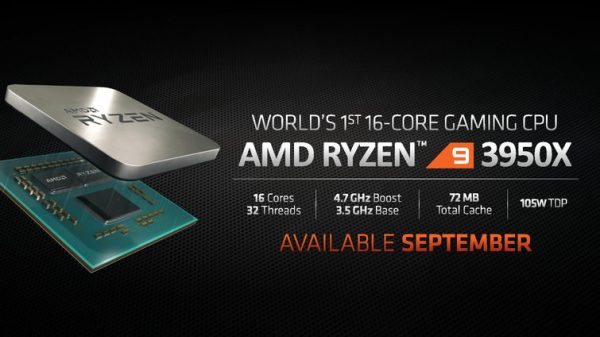 While the rest of the 3rd Gen Ryzen lineup is launching on the 7th of July, the Ryzen 9 3950X will be arriving a bit later in September with a $749 price tag. Aside from CPUs, AMD also announced its next-gen graphics cards today too, which you can read about HERE.

KitGuru Says: It looks like AMD’s CPU team had one more trick up their sleeve after Computex was done and dusted. What do you guys think of the new addition to the Ryzen 3000 series?