AMD’s Zen début is rapidly approaching, with some rumours pointing towards an October launch for the first eight-core chip. However, we still don’t know a ton about performance, outside of the fact that it met ‘all internal expectations’. Fortunately, it seems that someone over at AMD has been doing a little bit of talking, with some reports saying that Zen will compete with Intel’s Skylake in performance as well as price. 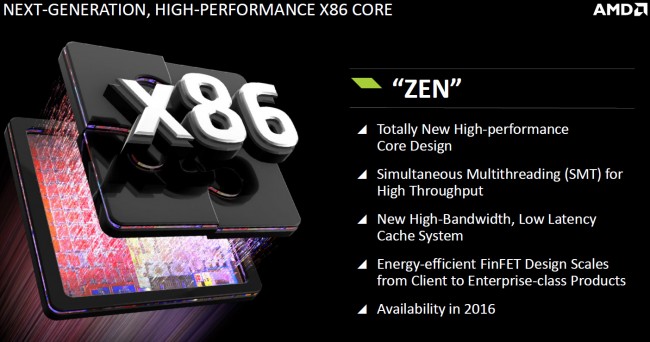 As ITWire reports, Taylor also had some good words to say about the company’s new CEO, Lisa Su, who has shifted AMD’s focus to three main areas: Gaming, Immersive Platforms (VR) and Datacenters.

It is worth noting that AMD has been pretty quiet on Zen publicly recently, even in the most recent quarterly earnings reports with investors. However, given that the first Zen desktop CPU is due out before the end of this year, it would make sense for the company to start talking about it a bit more over the next few months.

KitGuru Says: Plenty of enthusiasts have been waiting for AMD’s Zen processors for years. We haven’t seen much officially but hopefully the company can live up to expectations. Are any of you thinking about picking up a Zen processor when they come out?