Home / Component / Graphics / DOOM will be getting SLI support soon

DOOM will be getting SLI support soon

Just as the Vulkan API isn’t currently implemented into DOOM (2016) in the public build, SLI support is also missing at the moment. This is unfortunate for those with high-end multi-GPU PCs built to power the latest titles at 4K/UHD resolutions but support is on the way, according to one of id Software’s developers.

Writing over on Twitter, Tiago Sousa, id Software’s Lead Programmer behind the id Tech 6 Engine and DOOM addressed calls for SLI support and explained why it isn’t in the game right now. It turns out that there is an issue with Shadows limiting scaling of multiple graphics cards in SLI. 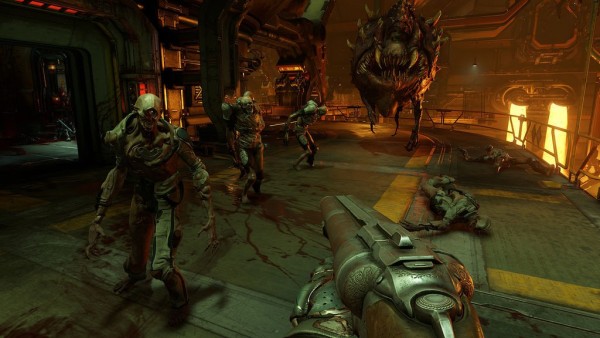 There has been talk of the id Tech 6 engine just not supporting SLI at all but that doesn’t appear to be the case here. We don’t know exactly when the SLI update is coming though, nor do we know if this also applies to AMD’s CrossFire.

In the mean time, if you’re stuck with using one card, then you can check out our DOOM analysis and benchmarks, which went up earlier this week. However, do note that while AMD’s R9 390 and R9 290 performance was poor at launch, a driver came out yesterday aiming to fix performance for these cards specifically.

KitGuru Says: DOOM is an excellent game but it does seem that quite a few are waiting for SLI support to enjoy it at higher resolutions. We have reached out to Nvidia to see if they can give us any idea on when we may see SLI support added to the game but we haven’t heard back yet so for now, just keep an eye out for any patches as support is definitely on the way.

Previous AMD’s Zen CPUs said to compete with Intel on performance and price
Next Want to be a ’90s videogame tester? You’ll need training