It looks like the lid on Intel's upcoming Broadwell-E processors has well and truly bl0wn off. Not only have several leaks from both motherboard makers and Intel itself confirmed the upcoming chips but now, benchmarks of the upcoming 6-core 6850K VS the Haswell-E 5820K have made their way on to the web.

This means that there is at least one Core i7-6850K out there in the wild being tested. Aside from the jump in architecture, these new Broadwell-E processors are built on the 14nm process, rather than 22nm which was used with Haswell-E. According to user ‘Maintenance Bot' on the Overclock.net forums, the new 6850K is notably thinner than the 5820K. 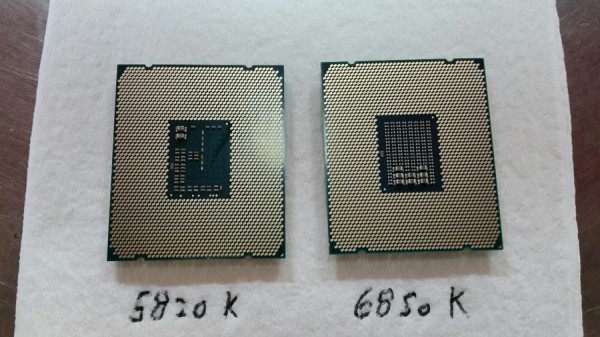 Here is a breakdown of the detailed scores for each processor along with hyperlinks to each Firestrike results page:

In Cinebench, the 6850K system scored 1311 points on the CPU, while the 5820K system scored 1191 points. The Overclock forum poster did not confirm where he got the chip from but he supplied plenty of images as proof and is continuing to make replies in the thread to answer what he can.

KitGuru Says: Given that at least one 6850K is out in the wild, we can't be too far off the official launch, which may well happen at Computex, which kicks off at the end of this month. Are any of you planning on upgrading to Broadwell-E?