If you happened to be wondering what AMD was using under the hood for its Ryzen chips as far as Thermal Interface Material goes, then you will be happy to know that professional overclocker, Roman ‘der8auer' Hartung has already successfully managed to delid his Ryzen 7 1700. By delidding the processor, he was able to find that AMD is using solder as its TIM of choice between the die and IHS (integrated heat spreader).

Der8auer went over his delid process in a YouTube video, though the video is not to be taken as a tutorial. Delidding can be a costly process and prior to this successful attempt, Der8auer had accidentally killed two other Ryzen 1700s while delidding. 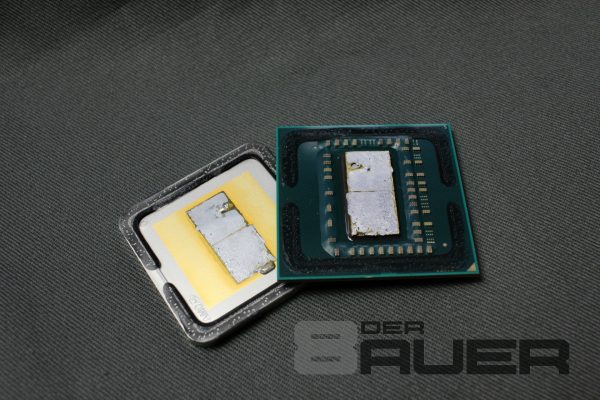 In order to separate the IHS from the die, razor blades and a heating element needed to be used to heat the glue up enough to allow the IHS to be carefully separated. With AMD still using pins on the bottom of its CPUs, this can be tricky enough as you need to be more careful while handling the processor in general.

With the IHS removed, we can see that AMD is using two small pads of indium solder and some gold plating to help with heat transfer. AMD appears to be using high quality stuff too, as there have been no reported issues of these CPUs running overly hot, essentially removing the need for delidding in the first place.

KitGuru Says: Delidding is a very tricky process and there is a very real chance of breaking your CPU, so it isn't something we generally recommend trying. However, it was certainly interesting to watch der8auer attempt it and reveal what AMD has going on under the hood of Ryzen.