Nvidia Corp. is working on two new affordable GeForce GTX 900-series products that will replace low-cost graphics cards released last year. The new adapters will be powered by the second-generation “Maxwell” architecture and their performance is expected to be comparable to that of the GeForce GTX 960.

Nvidia’s GeForce GTX 950 and GTX 950 Ti graphics adapters will be based on the GM206-250 graphics processing unit, which is a cut-down version of the GM206-300, which powers Nvidia’s GeForce GTX 960, according to VideoCardz. The GPU supports all modern graphics and GPU compute technologies, including DirectX 12.1, OpenGL 4.3, OpenCL 1.1 and others. The GM206 supports H.265 (HEVC) encoding and decoding and thus can be used to watch movies in Ultra HD resolution and on Ultra HD Blu-ray discs. The GM206 is also fully compatible with HDCP 2.2 content protection over HDMI 2.0.

Exact specifications of Nvidia’s GeForce GTX 950 and 950 Ti graphics cards are unknown, but it is highly likely that they will have more than 640, but less than 1024 stream processors (896 and 768 SPs are likely). Since the new boards belong to the GTX family, the new adapters will feature 128-bit memory bus. 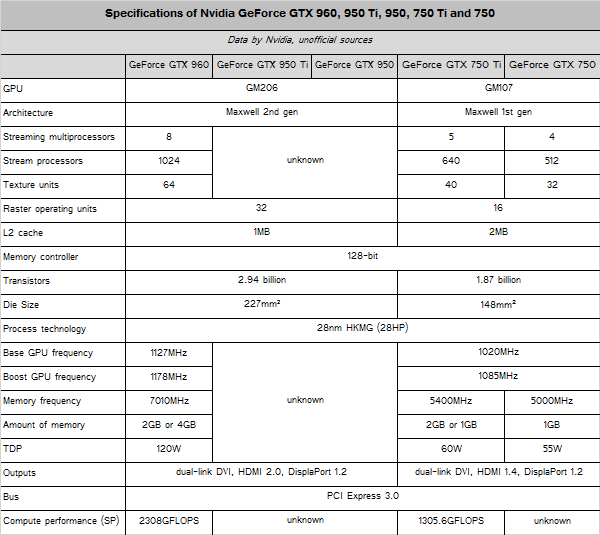 Nvidia’s new GeForce GTX 950 and 950 Ti graphics adapters will replace the company’s GeForce GTX 750 and 750 Ti, respectively. It is logical to expect the new boards to cost less than $150.

Previous Star Citizen’s FPS module has been delayed
Next Sony: PlayStation 4 is dominating in Europe, no need for price-cut