Using the tailwind of Nvidia’s ray tracing GeForce 20 Series Turing graphics cards announcement, AMD has unveiled its own dual-Vega Radeon Pro V340. Unlike the Green Team’s efforts, however, this looks to be based on AMD’s existing Vega architecture, strictly marketed towards data centres.

During its panel at the Las Vegas-bound VMworld, AMD revealed its brand new dual-Vega Radeon Pro V340 with 32GB of second-generation Error Correcting Code (ECC) high-bandwidth memory (HBM2). With no mention of a die shrink, it’s presumed to be running on existing Vega architecture, pairing 14nm GPUs that would otherwise be found within Vega 64 or Vega 56 into a dual-slot design.

It’s worth noting that this is not a gaming card set to compete with Nvidia’s existing 10 Series and upcoming 20 Series of cards, but rather a workstation card aimed at data centres that will be fine-tuned to compete with Nvidia’s Tesla P40. AMD has promised “up to 33 percent more than” its rival card, alongside the ability to run up to 32 individual 1GB virtual machines. 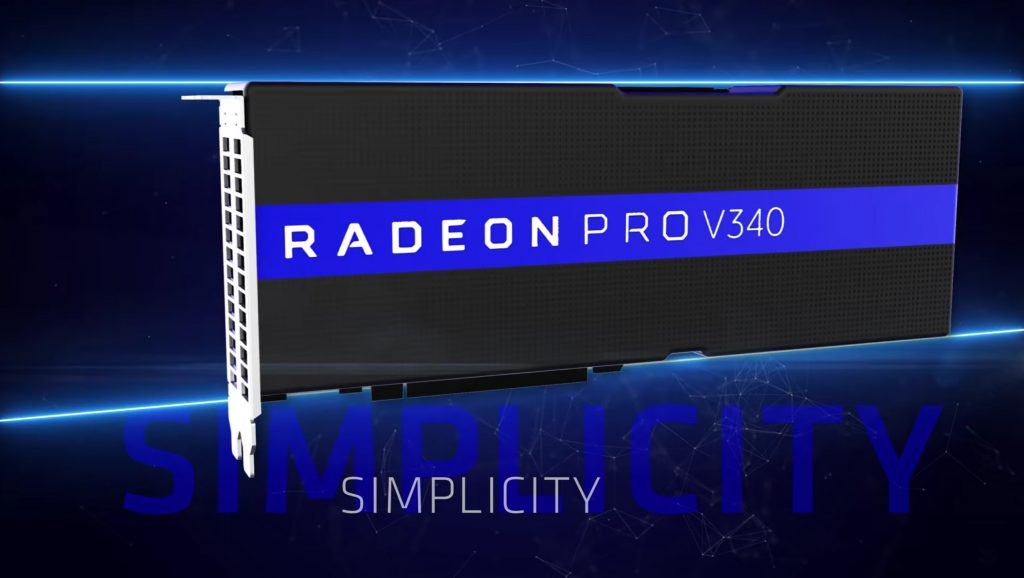 While it’s expected that AMD will have clocked the Vega GPU down heavily from its gaming counterpart, it’s been revealed that the Radeon Pro V340 will have “increased density, faster frame buffer and enhanced security” in order to deliver a powerful new choice on the market, according to Calvin Hsu, VP of Product Marketing of Citrix Systems.

“The AMD Radeon Pro V340 graphics card will enable our customers to securely leverage desktop and application virtualization for the most graphically demanding applications,” explains director of Product Marketing for VMware, Sheldon D’Paiva. “With Radeon Pro for VMware, admins can easily set up a VDI environment, rapidly deploy virtual GPUs to existing virtual machines and enable hundreds of professionals with just a few mouse clicks.”

AMD announced that the Radeon Pro V340 should become available in the final quarter of 2018, with no indication as to what it will be priced at.

KitGuru Says: Personally, I’m happy that AMD hasn’t revealed a new gaming GPU yet. I’d rather AMD keep their plans the oven a little longer, figuratively speaking, than unveiling just another iterative upgrade to try and combat Nvidia. The Radeon Pro V340 certainly looks like it will do wonders for the data centre world, too.