Forza Horizon 5 launches publicly today, but those who bought the premium edition have had early access since Friday. We have used that time to benchmark over thirty GPUs in this game, with performance data for both the Extreme and High presets. We also look into VRAM usage and how that affects the settings you will want to use, and discuss whether or not the built-in benchmark offers performance that is representative of actual gameplay.

Starting with a look at the graphics settings menu, we find a very healthy selection of options to tweak, from environmental texture quality, shadows, reflections and more. At the top there are also six presets to choose from, starting with Very Low, Low, Medium, High, Ultra and Extreme. For the bulk of our testing today, we’re looking at the Extreme preset, but we also investigate preset scaling, and benchmark a few older and lower-end cards with the High preset at 1080p. 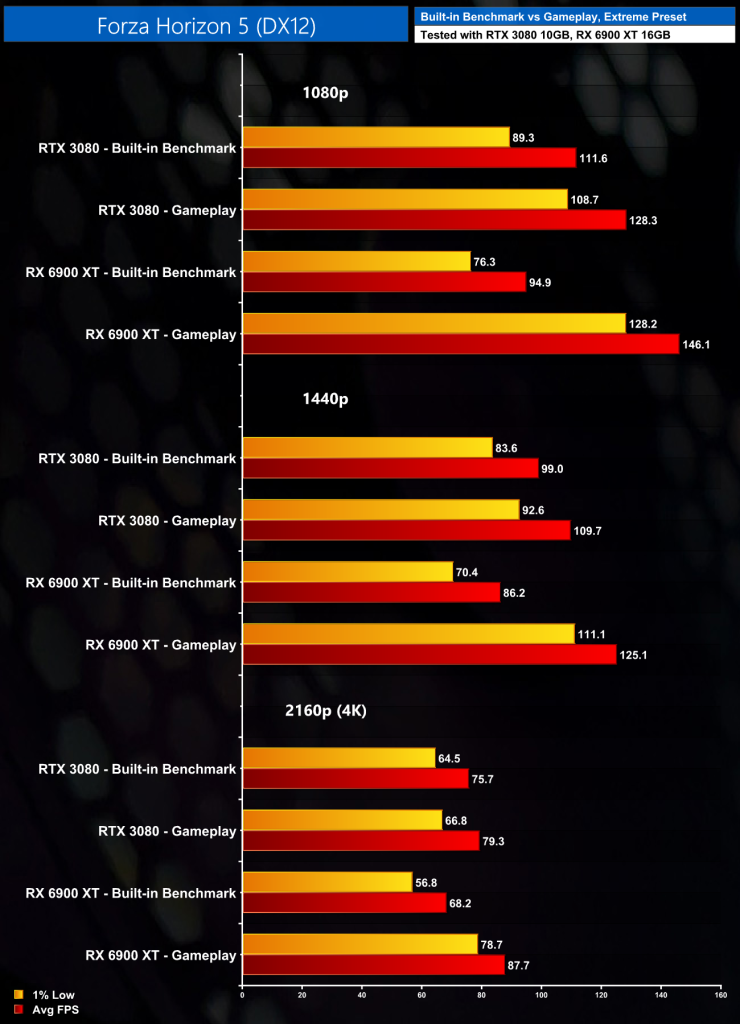 Forza Horizon 5 does feature a built-in benchmark and initially I was looking at using this for my testing today. However, while the benchmark delivers performance that is broadly representative of what you’ll see in game while using an Nvidia GPU, I found AMD GPUs performed much worse using the benchmark compared to what I saw when actually playing the game.

Take a look at the above chart for instance, for the RTX 3080, the delta in performance between the built-in benchmark and actually gameplay is pretty close, especially at 1440p and 4K. Taking 1440p as an example, the RTX 3080 performs just 10% worse in the built-in benchmark compared to my own test sequence. The RX 6900 XT however, performs 31% worse in the benchmark vs actual gameplay, making it a fair bit slower than the RTX 3080 – which just doesn't match up with the actual gameplay experience.

For all of my testing today then, I’ve benchmarked a lap of the Airport Cross Country Circuit race, which, in my experience, proved fairly typical of in-game performance. 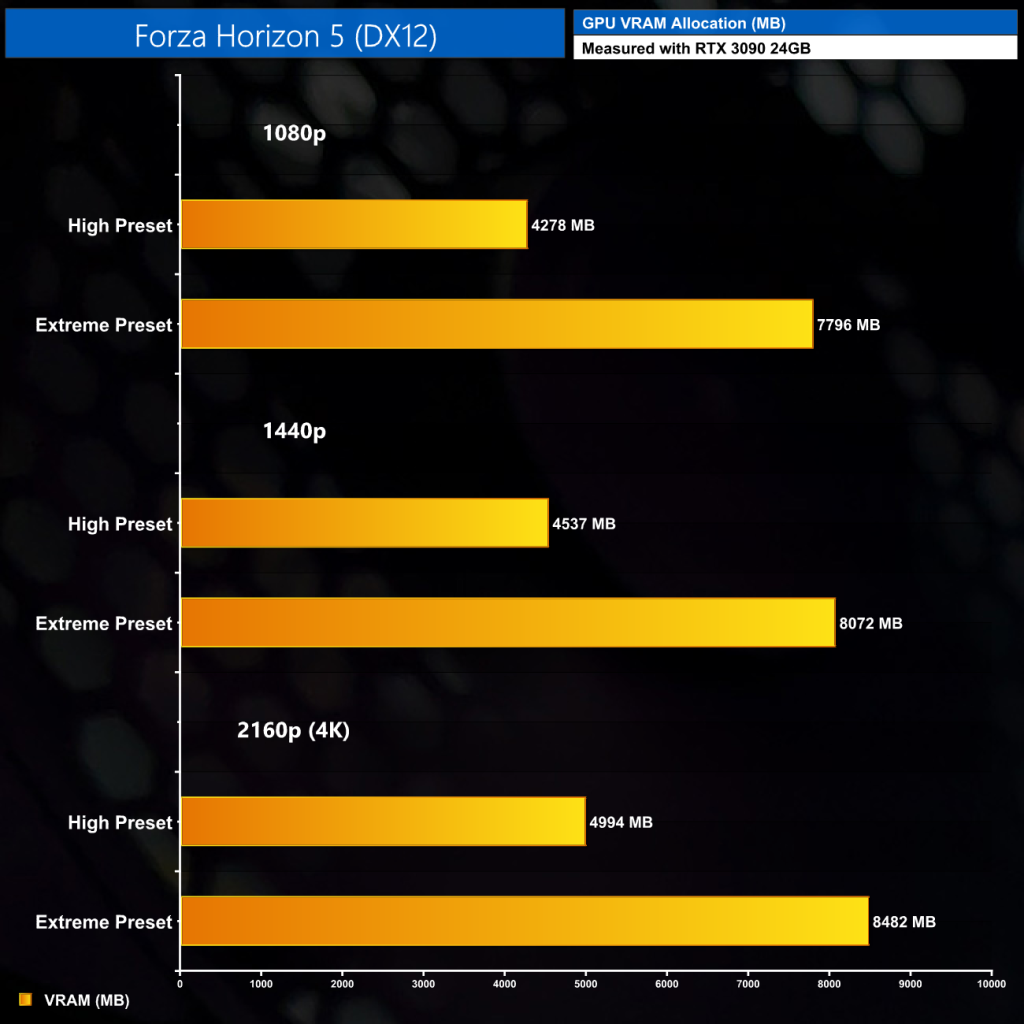 Here we start our testing with a look at VRAM allocation, measured with an RTX 3090 at 1080p, 1440p and 4K, using both the Extreme preset and the High preset.

The reason I’m starting with VRAM is because, clearly, the Extreme preset is very heavy on memory usage, with 7.8GB allocated at 1080p, 8GB at 1440p and about 8.5GB at 4K. That doesn’t bode too well for your 4GB RX 570s or 4GB GTX 1650s, but we also tested the High preset and that found memory usage with that preset is significantly lower. The game does also provide a warning message if it detects you’re running out of VRAM, so that is definitely something to keep in mind if you are experiencing stuttering or other performance issues. 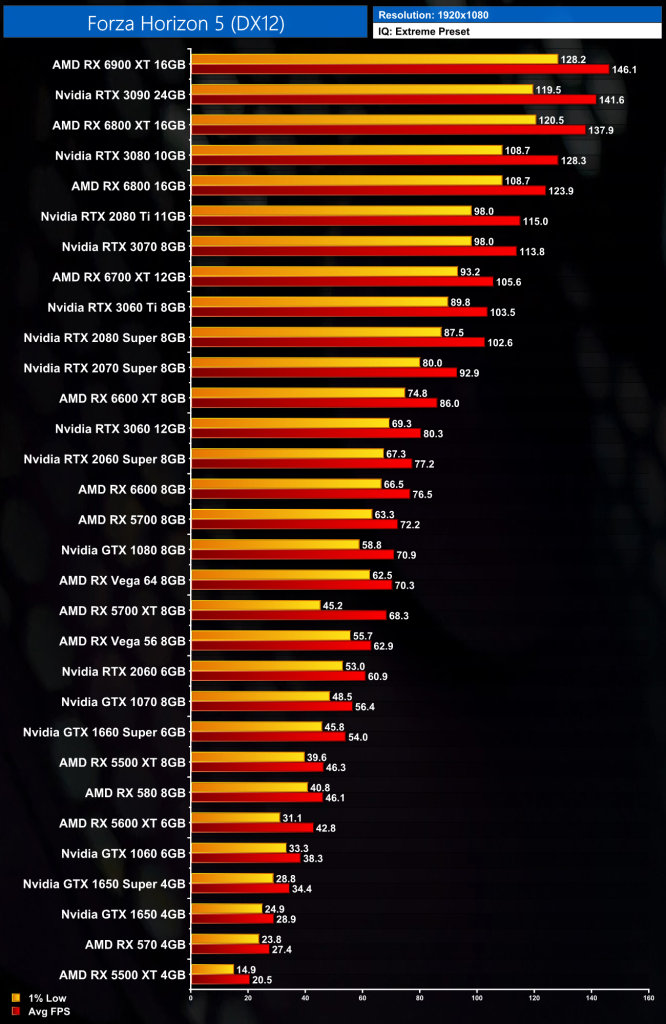 Note on the RX 5700 XT: For reasons unknown to me, I had significant issues with that GPU in Forza Horizon 5, even after trying two different 5700 XT cards and un-installing and re-installing the driver multiple times. Performance was just not stable and it is actually worse than the RX 5700 non-XT. As I say, I have absolutely no idea why this was happening and hopefully that won’t be your experience if you do have a 5700 XT, but as I tested two different cards and the issues persisted, I kept the data in… but with a strong asterisk attached. 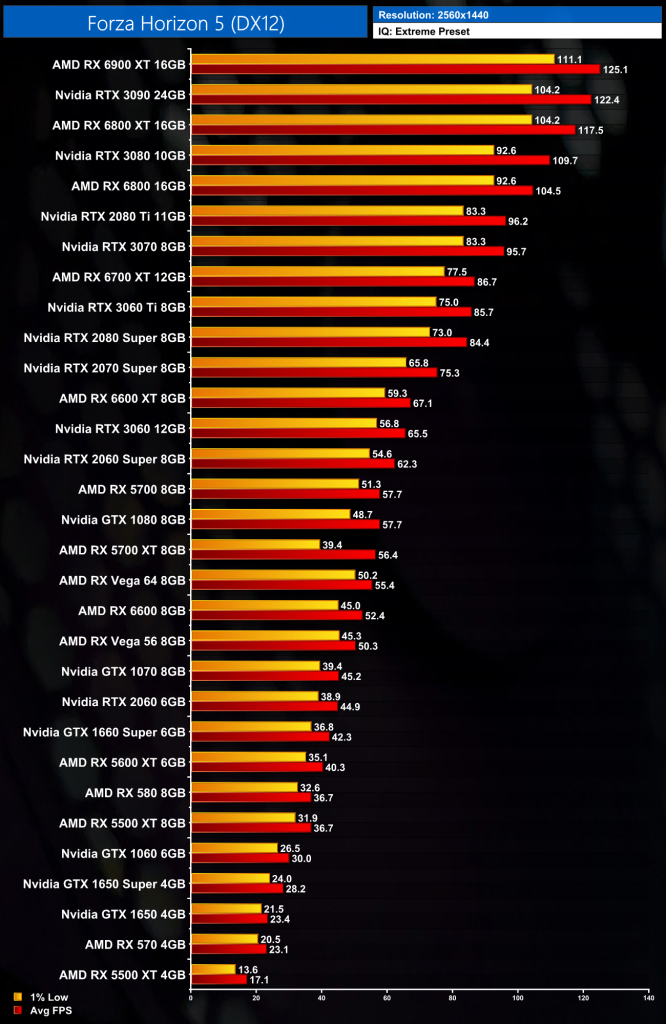 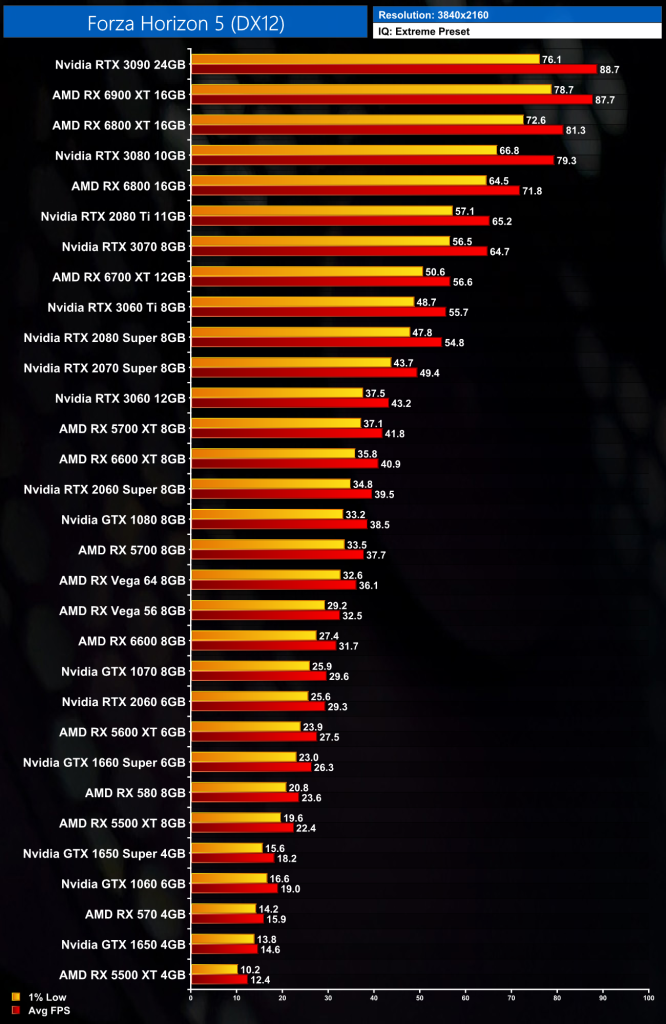 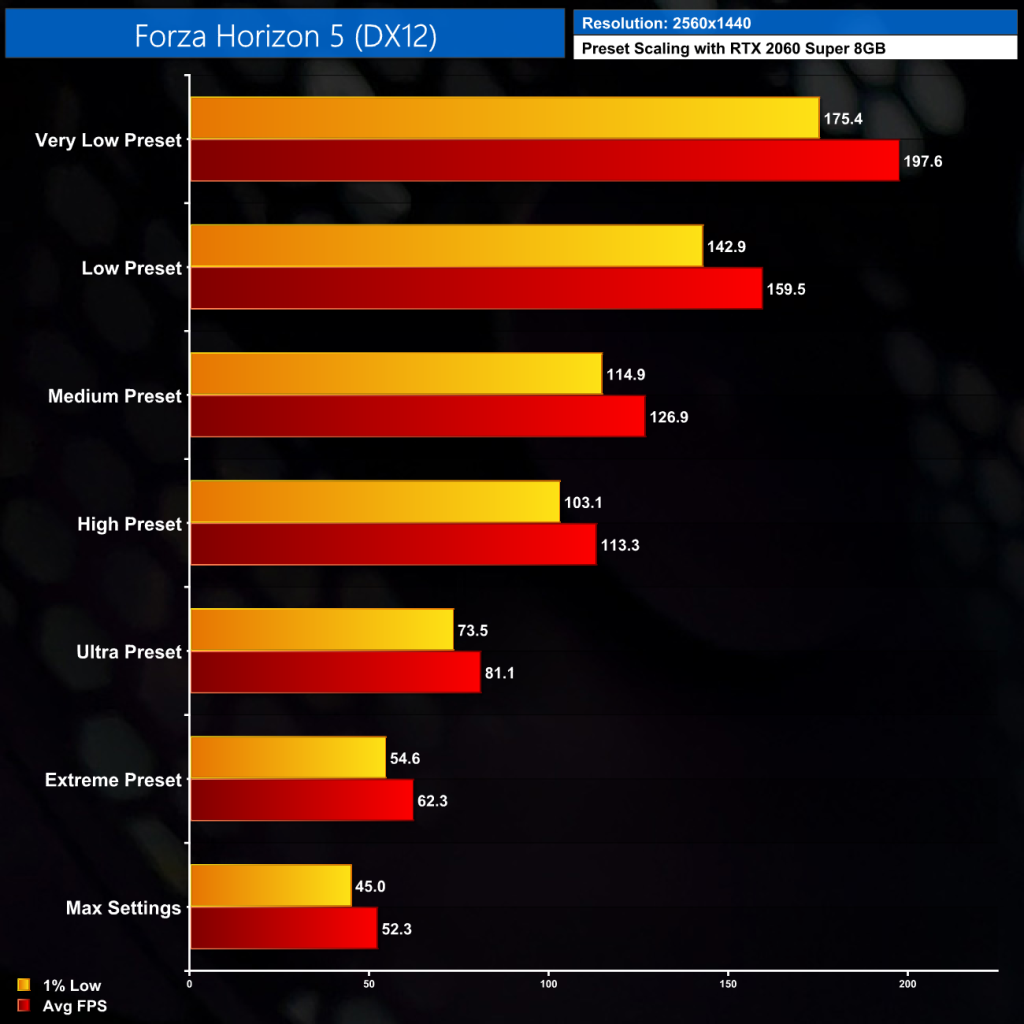 While the bulk of the data above showing performance from the Extreme preset, here we take a look at the six different presets to see how much performance can be gained by sacrificing image quality.

Thankfully, the game is very scalable so you can really pump the FPS fairly high if you want to, but it is worth starting at the bottom of the chart. As you can see, I added what I called ‘Max Settings', and that’s because the Extreme preset doesn’t actually put every single graphical option to its maximum value. A few settings like MSAA, FXAA, SSAO and reflections can go higher than the Extreme preset, and doing so will drop performance by 16%. 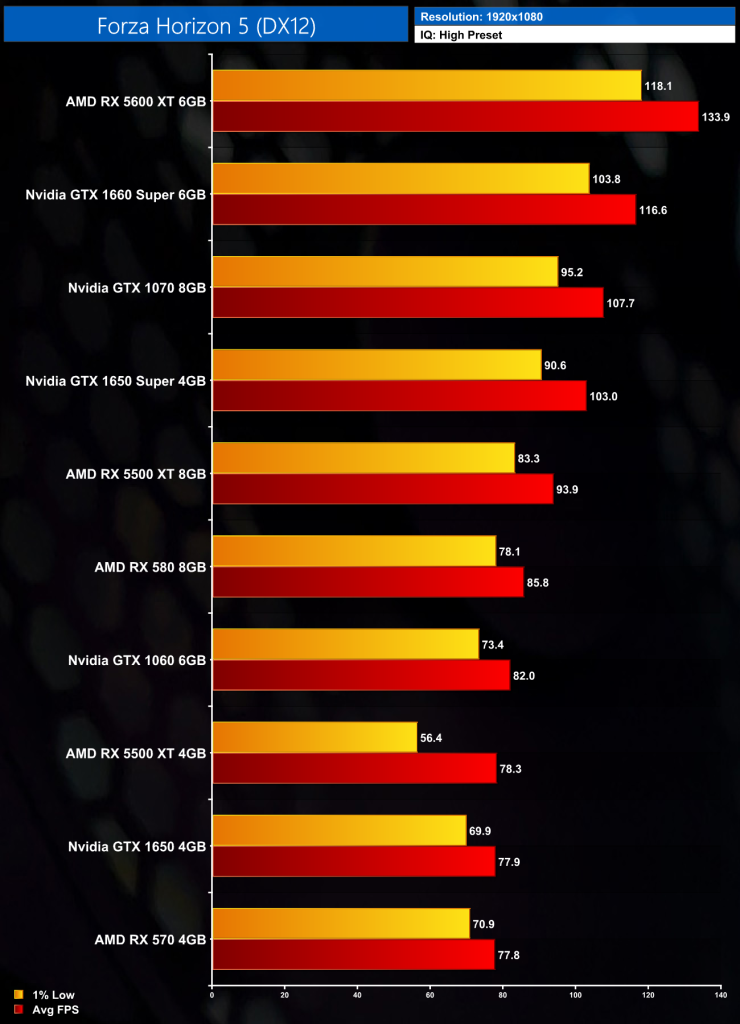 Looking at the performance data for 1080p using the High preset then, the good news is even the RX 570 4GB and GTX 1650 (non-Super) will hold above 60FPS at all times using these settings – so if you were worried by the Extreme preset testing, don’t worry, GPUs with less than 8GB VRAM can still play the game!

That is it for all of our performance data, and by and large I am very impressed with what is on offer. You’ve probably already seen just how good looking this game is (but if not, be sure to watch our video above!) and I am particularly impressed with the environments Playground Games has managed to build, the Mexican landscapes are a great backdrop for a racing game.

That said, I have noticed a few things and have some suggestions on what I would like to see improve. The first is to do with anti-aliasing. In game, we’ve only got MSAA and FXAA options – so there's no TAA. In my experience, you will notice some shimmering, particularly on foliage in jungle scenes, while fine lines also tend to break up and artefact. It’s not dreadful, but the lack of TAA – which could well help with those issues – is somewhat puzzling.

Secondly, texture pop-in is noticeable. Less so on Extreme settings, but during a lot of my testing with the High preset I did notice this frequently, with trees and leaves popping into their higher quality versions as you drive by. I’m not sure if this could be optimised further to reduce pop in – it is something every game has to deal with in some shape or form, but short of cranking everything up to Extreme, it can look slightly jarring.

The final thing I’d like to see is proper ray tracing. I know the game supports ray tracing in ForzaVista mode, but to be honest I’m not one to sit and stare at close ups of the cars for hours, so that doesn’t really interest me. I would, however, love to see proper ray traced reflections on your rear windscreen for instance, or on the bonnet of the car.

In fairness, the reflections used already do look very good, especially if you’re not really focusing on them. However, if you look at the rear windscreen while driving, you can see objects that are reflected in the glass do have a tendency to just disappear after a certain period of time – they just pop out of view entirely, while the reflections themselves aren't of the highest resolution. I am a big fan of ray traced reflections so I think that could really help with the immersion factor, especially if they arrived with DLSS to offset the performance loss. 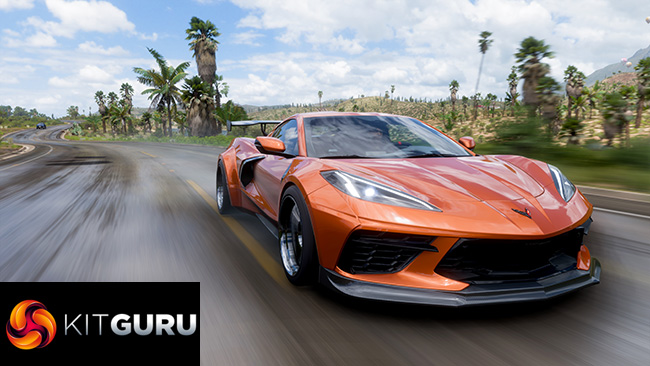 On the whole though, I am very happy with Forza Horizon 5 and am looking forward to getting a proper playthrough now all of this testing is complete! Minor issues aside, it is a beautiful game, I think Playground Games did a good job, and considering the visuals on offer I'd say the performance levels are justified.

The obvious takeaway from my testing is the sheer amount of VRAM required for the Extreme settings, with usage approaching 8GB even at 1080p. Actual processing requirements aren’t unreasonable though, as demonstrated by the likes of the RX 580 or RX 5500 XT 8GB, but those with less VRAM will want to dial back some settings.

KitGuru says: Have you been playing Forza Horizon 5 – if so, what do you make of the game, and are you happy with the performance?