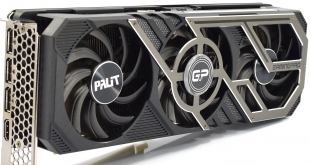 Despite launching at the beginning of the month, we are yet to look at a custom RTX 3060 Ti graphics card – the subsequent launches of first the AMD RX 6900 XT and then Cyberpunk 2077 kept our attention elsewhere. That changes today however, as we assess the Palit RTX 3060 Ti GamingPro OC. With a hefty factory overclock and a power target that is 40W higher than the reference spec, what can this card offer to the mid-range market?

In terms of its appearance, the Palit RTX 3060 Ti GamingPro OC may look familiar, and that’s because it shares a very similar design to the RTX 3080 GamingPro OC that we reviewed a couple of months ago. It’s not quite identical though, while the cooler has also – understandably – been stripped back slightly as the 3060 Ti is a lower-power chip.

Still, increasing clock speed by 135MHz compared to the Founders Edition is no mean feat, and it will be interesting to see how that affects the thermals and noise levels of this card. We also test seven games, including Cyberpunk 2077, to see if the GamingPro OC can offer a meaningful performance increase over the Founders Edition. 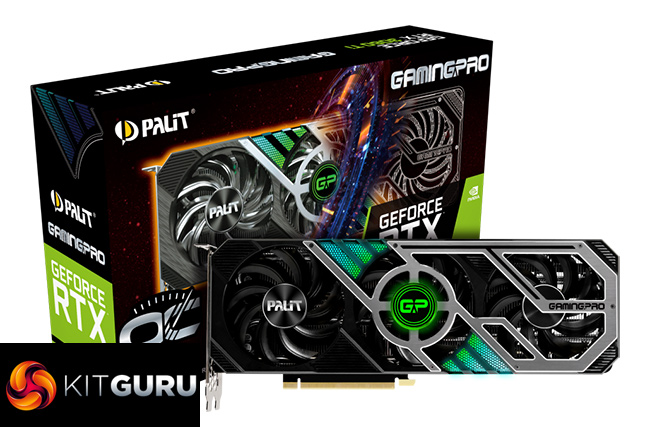 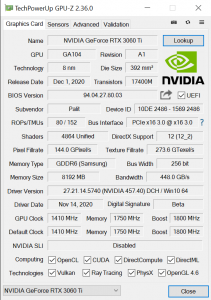 The RTX 3060 Ti is the first Ampere GPU to launch which wasn’t announced in the September livestream event. Just like the RTX 3070, however, it uses Nvidia’s GA104 GPU, but a cut-down version of that silicon. That means the RTX 3060 Ti incorporates 38 Streaming Multiprocessors (SMs), and thanks to Ampere’s new SM structure with its two FP32 datapaths, each SM houses 128 CUDA cores, giving a total of 4684.

Ampere also places one RT core, and four Tensor cores, in each SM, giving a total of 38 RT cores and 152 Tensor cores. This is accompanied by 152 texture units, and 80 ROPs which are now housed directly within each graphics processing cluster (GPC), with 16 ROPs per GPC, and 5 GPCs in total for RTX 3070.

For the memory, Nvidia is using the same configuration as the RTX 3070. That means it sports 8GB of 14Gbps GDDR6 memory, operating over a 256-bit bus, for total memory bandwidth of 448 GB/Sec.

Lastly, for total graphics power, Palit has set a power target of 240W for the GamingPro OC, which is a 40W increase of the reference specification.