AMD’s John Byrne gets another promotion

At the same time that we learn about Intel suffering another huge fine for illicit business practices, AMD seems to be stepping it up again with another reshuffle at board level. So far, the changes seem to have had a positive effect. KitGuru ponders the size and likely impact of the changes.

With Dr Lisa Su appointed as the new Chief Operating Officer, the company will be effectively divided into two major groups under her. One will take care of Enterprise, Embedded and Semi-Custom Business – which Dr Su will be heading up directly.

The second sees the creation of a Computing and Graphics Business Group under John Byrne, who gets promoted to Senior Vice President and General Manager.

Both of these groups will be having dealings with ARM – arguably AMD’s most crucial relationship over the next 3 years, as it aims to deliver its Ambidextrous solution to market.

With some analysts predicting that ARM-based solutions can take half of Intel’s business in some markets in the near future, it makes sense to have every top player in your team interfacing with the chaps who provide the computing architecture for Apple’s iPad etc.

The job titles themselves are all well and good, but what does it mean in terms of the sizes of the teams being managed and the likely changes that will follow in terms of how AMD does business?

In John Byrne‘s case, as Chief Sales Officer he would have been responsible for around 600 sales and marketing people. This new role will more than triple the number of people under him – specifically by bringing in the engineering teams etc.

The logic here is that if you can ‘glue together’ customer requirements with the innovative abilities of your engineers, then you can make chips that have just the right specifications to satisfy market demand – without any undesirable/unnecessary features.

Simpler, more focused chips mean easier production phases, quicker time to market and lower prices once you get in front of the customer.

All of which could make the world a more difficult place for Intel. Hot on the heels of being told that it will have to cough up close to $1.4 Billion for violating anti-trust rules and a serious stutter in its tick-tock processor release schedule on 14nm, the last thing that Intel probably wanted to hear today is that AMD is re-energising. 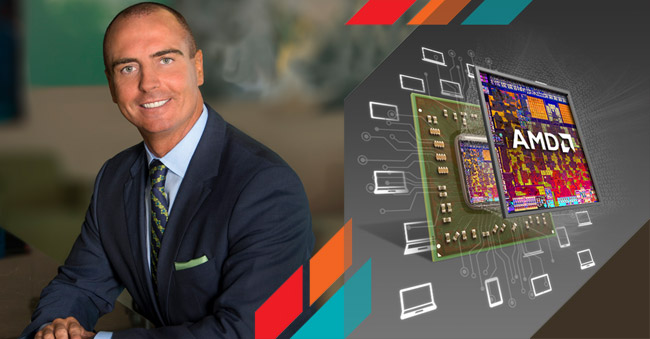 KitGuru says: Top execs within any company are unlikely to tell you their weakest link. That said, if we had to guess with AMD in the past, it would be execution. Having a great idea is one thing. bringing it to market in a timely fashion is something completely different. Combining the sales, marketing and engineering teams for the computing and graphics areas under one person, has the potential to be a game-changing move by CEO Rory Read.