When Asus launched the RX 5700 TUF Gaming X3 OC series graphics card back in October 2019, it received some rather negative criticism from enthusiasts and tech reviewers across the industry, due to the design of its thermal solution. Asus has acknowledged this now and updated the cards cooler with a revised heatsink and fan design.

While the initial version of the Asus RX 5700 TUF Gaming X3 OC Edition graphics card managed GPU core temperatures admirably, graphics card reviewers noticed there was a fundamental part of the cards heatsink design missing. Critical areas of the PCB such as the VRAM had to rely on airflow from the fans for cooling, rather than the usual approach of a heatsink and airflow from fans.

This meant that under heavy load the VRAM on the Asus RX 5700 TUF Gaming X3 OC series graphics card would get rather toasty, 10 degrees hotter than AMD’s reference card in fact. During our own testing of the card, we saw VRAM temperature reach 88°C with the memory manually overclocked. While this is still within the operating range of the Micron Memory modules, it isn’t optimal. 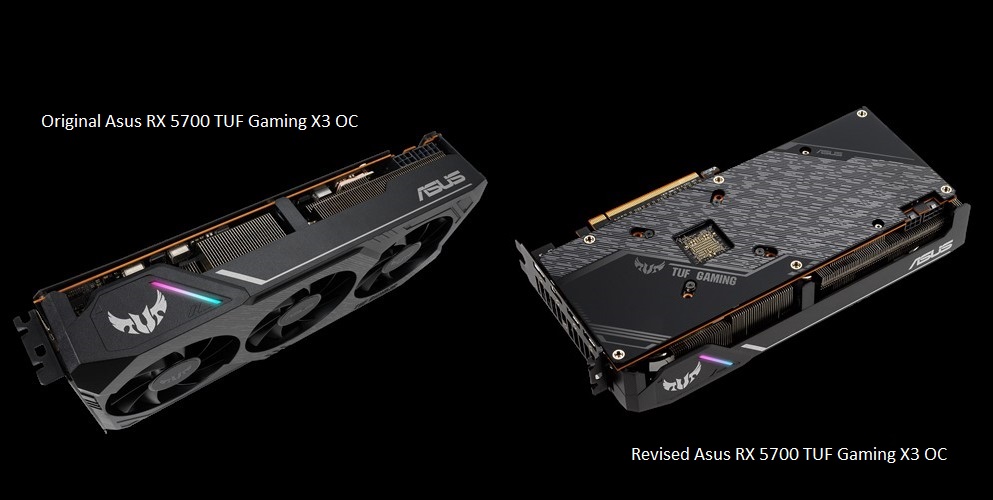 Asus has taken this constructive criticism on board and has launched a revised version of the RX 5700 TUF Gaming X3 OC Edition and equivalent RX 5700 XT card, that features a completely redesigned heatsink and new Axial Tech fan solution to address this problem. According to Asus, the revised heatsink design will provide improved contact with critical areas of the PCB such as the VRAM, for better thermal dissipation performance.

Other than the updated thermal solution, the rest of the card remains the same, which means the game and boost clocks of 1720 MHz/1750 MHz (RX 5700) and 1795MHz/1905Mhz (RX 5700 XT) will be unchanged. Both cards also include an Asus software-based OC mode that adds an additional 70MHz to the GPU core.

Asus has made the revised version of the cards available to purchase now, with the same MSRP as the originals.

KitGuru says: With all the negative press the RX 5700/5700 XT TUF Gaming X3 OC suffered at launch, it’s not a huge surprise to see Asus revise the cooler to fix the problem. What do you think of this approach from Asus, are you happy to see a manufacturer taking notice of constructive criticism and improving products?