A couple of months has passed since PowerColor teased us with images of a liquid-cooled version of its Radeon RX 5700 XT Red Devil graphics card. Today the company has officially announced the launch of the new water-cooled RX 5700 XT Liquid Devil.

PowerColor has been a long-term partner of AMD, the company was one of the original adopters of factory overclocked cards and the first to feature premium performance water blocks. PowerColor is once again partnering with one of the most well-known names in the liquid cooling industry EKWB to bring a uniquely designed GPU water block for its RX 5700 XT, providing advanced users with unrivalled thermal performance.

Not only does the PowerColor RX 5700 XT now feature a liquid cooling solution, the company claims to have used a selective binning process to ensure only the best 5700 XT GPUs find their way into the Liquid Devil, in order to maximise the potential and make sure all the Liquid Devil cards are able to hit the highest performance points. 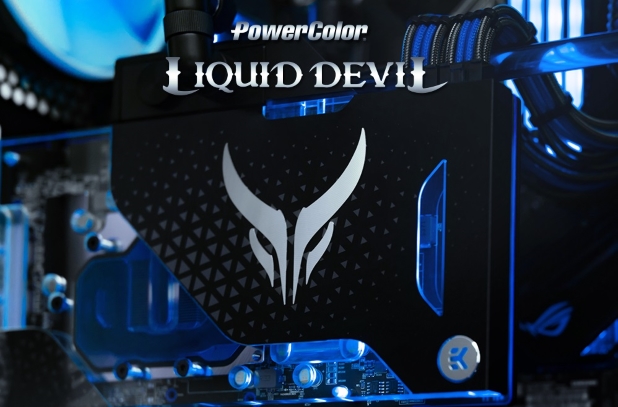 Additionally, PowerColor has built the Liquid Devil with a new 12-layer PCB design, including 10 VRMs that utilise DrMOS and high-polymer capacitors able to handle over 300W of power.  Unlike the standard RX 5700 XT's dual BIOS option which include OC and Silent modes, the Liquid Devil features an Unleash and OC mode. OC mode offers the same overclock seen on cards such as the Red Devil and Red Dragon, while the Unleash mode take the performance up a notch with higher clock frequencies of up to 2070 MHz on the GPU core.

PowerColor suggests the RX 5700 XT Liquid Devil will be available week commencing 25th November with an MSRP of £569. The card will arrive to customers bundled with the Liquid Devil Dye Pack for use with clear or white CryoFuel coolant.

KitGuru says: With a carefully selected GPU binning process in the PowerColor RX 5700 XT Liquid Devil, users should be able to push the card to its limit and produce the best performance yet from the AMD Radeon RX 5700 series platform.