Gigabyte set to launch a new series of graphics cards, RX 5600 XT is on the list

As listed in the EEC (Eurasian Economic Commission), Gigabyte is getting ready to launch a new series of graphics cards, called Eagle. It’s not certain whether this series will replace an existing one or if it’s just an addition to Gigabyte’s current graphics cards portfolio, but, according to the listing, it will have 30 models.

Initially noted by Twitter user @KOMACHI_ENSAKA, this listing, as shown in the image below, includes both AMD and Nvidia GPUs, containing most of the currently produced GPUs from each company, except from the Nvidia RTX 2080 Ti. The “surprise” here is the Radeon RX 5600 XT, a rumoured upcoming model from AMD. This listing also confirms that the Radeon RX 5600 XT will be paired with 6GB of VRAM, most likely GDDR6. 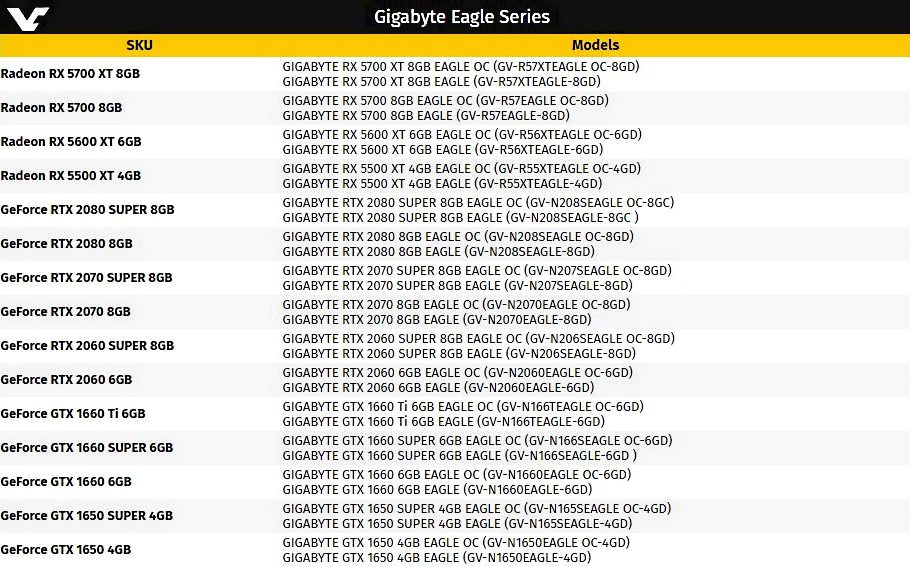 It’s worth noting that this probably won’t be the only RX 5600 XT model from Gigabyte as they have other series of graphics cards, like the Gaming and Aorus lineups.

All of the models of the Eagle series will include an OC and a non-OC version. It’s expected that more news on any as-yet unannounced GPUs will come at CES in January 2020.

KitGuru says: Are you interested in seeing these new graphics cards? Do you think that Eagle is a new series, or will it replace an existing one?