The graphics card pricing situation appears to be moving in the right direction. Last month, GPU prices were 81-91 percent above MSRP on average, but that number has been dropping. If GPU prices continue reducing at this rate, we might see some cards finally reach MSRP pricing.

According to 3DCenter.org, availability of GPUs has been improving, including increased stock of RTX 3060 Ti and RX 6800 graphics cards. Better yet, retail pricing is trending downwards at a fairly rapid rate. 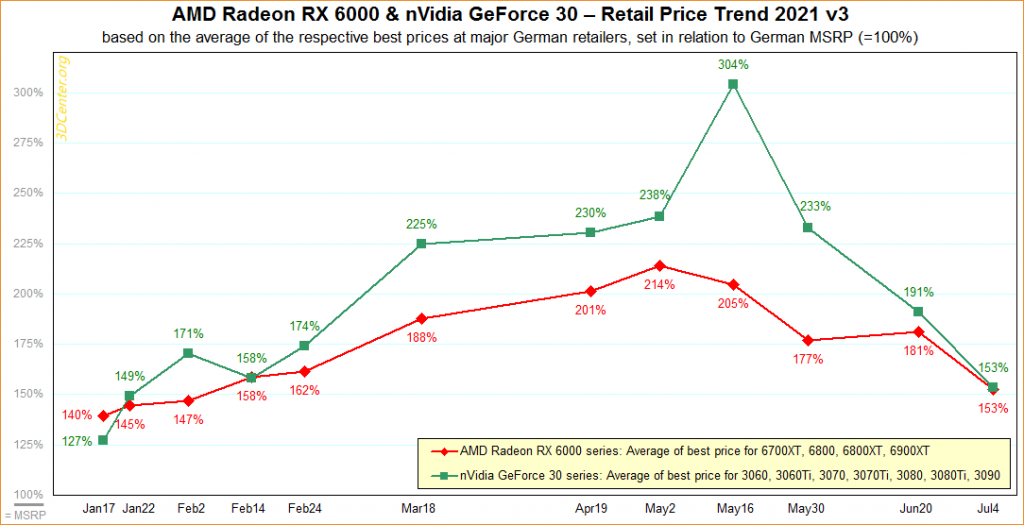 The price reduction was most noticeable on Nvidia GPUs, which were selling on average at 91% above MSRP, but it has now reduced to 53%. Currently, the RTX 3080 Ti and the RTX 3090 are the GPUs selling closest to MSRP, and the RTX 3060 Ti is the most surcharged.

KitGuru says: Considering the rapid decline of GPU pricing in the last month, we strongly advise you to wait for prices to stabilise. If prices keep reducing at this pace, we may see some GPUs hitting MSRP by the end of July, something most of us couldn’t believe a month ago.