Three different PowerColor Radeon RX 6600 XT cards listings have been spotted at a New Zealand retailer, suggesting AMD might release the RX 6600 XT sooner rather than later. Currently, this GPU is rumoured to launch in August, although AMD has yet to announce anything officially.

Lately, there have been lots of rumours and leaks regarding the Radeon RX 6600 XT. From what we’ve gathered, this GPU is expected to release on August 11th, and early benchmarks already have us wondering about real-world performance.

Now, listings of three different Radeon RX 6600 XT models were spotted at a New Zealand retailer. The listings have been removed but VideoCardz was able to take a screenshot showing the prices and names of each model beforehand. 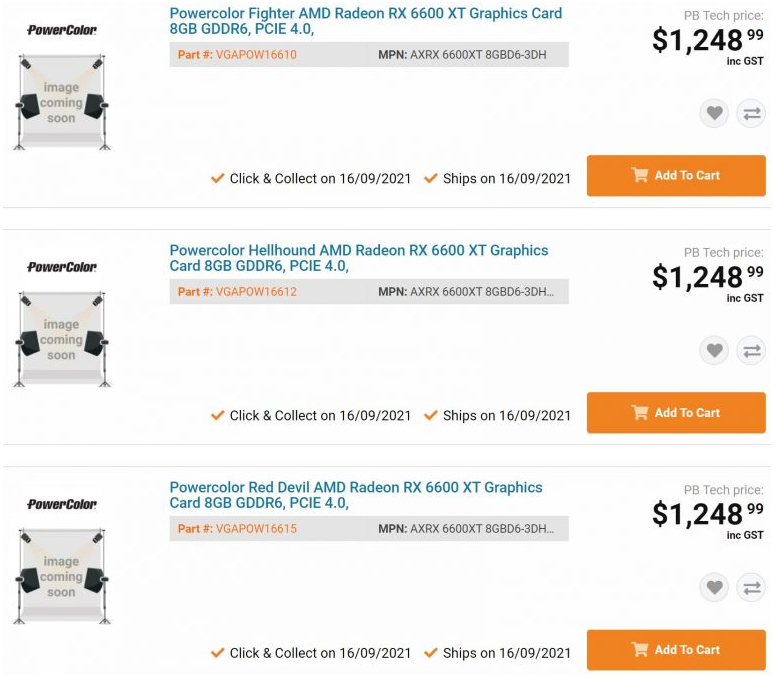 As seen in the image above, the three PowerColor Radeon RX 6600 XT cards were the Fighter, Hellhound, and Red Devil models. As per their name, each of them will feature 8GB of GDDR6 memory, further confirming the memory specifications we’ve been hearing. Clock speeds were not disclosed.

Regarding their pricing, they were each listed at $1248.99 (New Zealand dollars), which is about £633.36. Considering all three models are priced equally, and how expensive they would be if they were sold at this price, we will assume these values are placeholders.

KitGuru says: If there already are listings of these cards out in the wild, there’s a good chance that their launch is right around the corner.