Unlike the AMD Radeon RX 6000 series which has launched with ResizableBAR enabled, the only Nvidia RTX 30 series card to support this feature at launch was the RTX 3060. Other RTX 30 GPUs have the required specifications to support it, but a vBIOS update is required to enable it. Nvidia has yet to ship this, but board partners like Galax and Gainward are taking matters into their own hands this week. 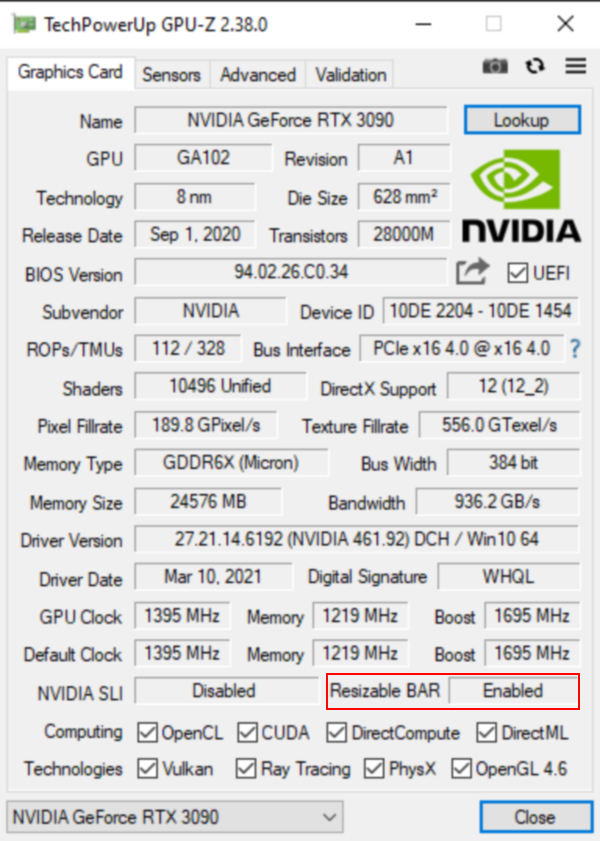 Initially spotted by u/cooldogman, Galax and Gainward have released a tool to flash the new vBIOS, allowing owners of selected Galax and Gainward graphics to enable ResizableBAR. To do it, owners will have to download the respective vBIOS of their graphics card and run the program that will flash it to the card.

Some Reddit users have already tried to update the vBIOS of their cards, but only some had success doing it. Redditor u/El-Maximo-Bango for example was able to flash the new BIOS onto a Galax RTX 3090 SG. Other users with RTX 30 series cards from different manufacturers also tried, but these attempts were unsuccessful.

Nvidia originally planned to enable ResizableBAR support for all RTX 30 series graphics cards by the end of March, but the company has said little since. We are just days away from the end of the month, so hopefully Nvidia will provide an update at some point this week.

KitGuru says: There is still a little bit of time before March ends, so Nvidia has a chance to meet its own timeline and ship the vBIOS as originally promised. Do you own an RTX 30 series graphics card? Are you waiting on the vBIOS update for ResizableBAR support?